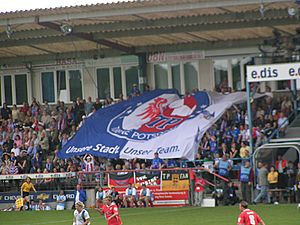 1. FFC Turbine Potsdam is a German women's association football club from Potsdam, Germany. The club plays in the Frauen-Bundesliga and is one of the most successful teams in Germany.

All content from Kiddle encyclopedia articles (including the article images and facts) can be freely used under Attribution-ShareAlike license, unless stated otherwise. Cite this article:
1. FFC Turbine Potsdam Facts for Kids. Kiddle Encyclopedia.