Hertha BSC is a German football club based in Berlin. They started in 1892. Hertha Berlin was one of the founding clubs of the DFB (Deutscher Fußball Bund or German Football Association) in Leipzig in 1900.

BFC Hertha 92 (Berlin Foortbal Club Hertha 92) was formed in 1892. Its name and team colours were taken from a steamship with a blue and white funnel. One of the men who founded the club had taken a day trip on this ship with his father. Hertha is a variation on the name Nerthus, a Germanic fertility goddess.

Hertha always played well, but were not financially successful. They won the first Berlin championship final in 1905. Because of money troubles in 1920 Hertha merged with the richer Berliner Sport-Club to form Hertha Berliner Sport Club. The new team was still successful, but never the best. Hertha BSC was in the German championship final every year from 1926 to 1930, but were only able to win in 1930. Hertha and BSC split in 1930, and Hertha won the championship again in 1931.

Hertha was Germany's second most successful team during the inter-war years.

Play under the Third Reich

German football was re-organized under the Third Reich in 1933 into sixteen top-flight divisions, which saw Hertha playing in the Gauliga Berlin-Brandenburg. The club continued to be successful in their division, regularly finishing in the upper half of the table and capturing the divisional title in 1935, 1937, and 1944. However, they did not do well nationally, and never got past the early rounds of the national championshipships.

After World War II, occupying Allied authorities banned most organisations in Germany, including sports and football clubs. Hertha restarted at the end of 1945 as SG Gesundbrunnen (named after a district of northern Berlin) and resumed play in the Oberliga Berlin - Gruppe C. The thirty-six teams of the first season of the postwar Oberliga Berlin were reduced to just 12 the next year and the club found itself out of first division football and playing in the Amateurliga Berlin. By the end of 1949, they had become Hertha BSC Berlin again.

In the 1949/50 season the Soviets would not allow Hertha to play against East German teams, because they had signed some players and a coach who had left the Dresden club SG Friedrichstadt for West Berlin. A number of sides from the eastern half of the city were forced from the Oberliga Berlin to the newly established DDR-Liga beginning with the 1950-51 season.

Throughout the 1950's there was a rivalry with Tennis Borussia Berlin, but the idea of the two merger between the two clubs in 1958 was rejected.

Hertha had to sell the team's former home ground in 1974 when investigations about the match fixing scandal of 1971 showed that the club was 6 million DM (€3 million) in debt.

The team continued to enjoy a fair measure of success during the 70s but gradually slipped down into the third tier Amateur Oberliga Berlin where they spent two seasons (1986-87 and 1987-88).

After two turns in the Bundesliga (1982-83 and 1990-91) Hertha was immediately relegated after poor performances. Hertha's amateur side was more successful, getting to the final of the German Cup in 1993 where they lost 0:1 to Bundesliga side Bayer Leverkusen.

By 1994 Hertha BSC was 10 million DM (€5 million) in debt. More land had to be sold and a new sponsor and management team were found. By 1997 Hertha got back into the Bundesliga. The y were the first Berlin club in 10 years to be in the top division. Since then they have generally finished in the top third of the Bundesliga.

Most recently, bright spots for the side have been a continuous string of appearances in international play in the UEFA Cup and the UEFA Champions League beginning in the 1999 season, and the signing of players such as Sebastian Deisler and Brazilian international Marcelinho, named the Bundesliga's player of the year in May of 2005. Hertha has also invested heavily in its own youth football academy, which has produced several players with Bundesliga potential.

The team was close to relegation in the 2003-04 season, but managed to finished 4th the following season. Hertha only missed out on the Champions League after they were held to a draw on the final day by Hannover 96, which saw Werder Bremen over take them for the spot on the final day. As a thank-you gesture, Werder sent the Hannover squad ninety-six bottles of champagne. In 2005-06 the Herthaner finished 6th, and qualified for the UEFA Cup by defeating FK Moskva in the Intertoto Cup. 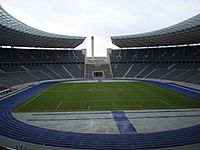 Hertha BSC plays its matches in Berlin's Olympiastadion. It is biggest stadium in Germany except for Borussia Dortmund's Westfalenstadion.

The Olympiastadion hosts the annual German Cup final and was the site for six matches of the 2006 FIFA World Cup as well as the tournament final.

From 1904 to 1963, Hertha's home ground was the Plumpe in Wedding's Gesundbrunnen district. A new stadium was built there in 1923. BSC left that site when it joined the Bundesliga in 1963. It was the sale of the Plumpe site in 1974 helped the club avoid bankruptcy

All content from Kiddle encyclopedia articles (including the article images and facts) can be freely used under Attribution-ShareAlike license, unless stated otherwise. Cite this article:
Hertha BSC Facts for Kids. Kiddle Encyclopedia.