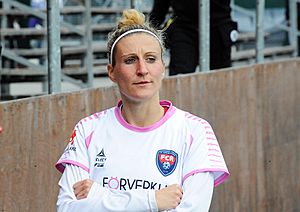 Anja Mittag (born in Karl-Marx-Stadt, East Germany on 16 May 1985) is a German association football player who currently plays for Paris Saint-Germain Féminines and the Germany women's national football team. She has won the 2007 FIFA Women's World Cup, UEFA Women's Euro 2009 and the UEFA Women's Euro 2013. She was also Sweden's Player of the Year in 2012 and 2014 while she played in the Damallsvenskan.

All content from Kiddle encyclopedia articles (including the article images and facts) can be freely used under Attribution-ShareAlike license, unless stated otherwise. Cite this article:
Anja Mittag Facts for Kids. Kiddle Encyclopedia.