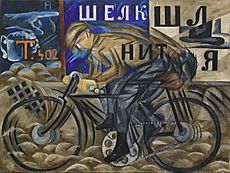 The Cyclist, 1913, with cubist and futurist influences 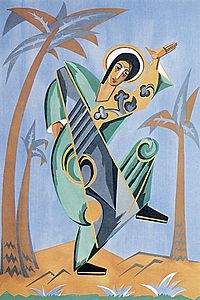 Goncharova's design for St John. Part of a commission by Diaghilev for the ballet The Liturgy

Natalia Sergeevna Goncharova (16 June 1881 – 17 October 1962) was a Russian painter, designer and writer. As an artist she was avant-garde: her art styles were influenced by fauvism, cubism and futurism. As a designer she was notable for her set and costume creations for ballet and theatre.

Goncharova holds the world record for the price paid for a work of art by a woman. The painting was Goncharova's 1912 still-life The Flowers, and it sold for $U.S. 10.8 million.

Natalia Goncharova studied sculpture in Moscow, but worked as a painter and designer. She was inspired both by an interest in Russian folk art, and by modernism in art. With her lifelong partner Mikhail Larionov she first developed a style called Rayonism. They part of the pre-Revolution Russian avant-garde. They helped to organise the so-called 'Donkey's Tail' exhibition of 1912, and showed their work at the Der Blaue Reiter exhibition in Munich the same year.

Goncharova became famous in Russia for her Futurist work such as The Cyclist and her later Rayonist works. They organised lecture evenings and Goncharova wrote and illustrating a book in Futurist style.

The largest collections of her work are in the Pompidou Centre in Paris; the Russian Museum in St. Petersburg; and the State Tretyakov Gallery, in Moscow.

All content from Kiddle encyclopedia articles (including the article images and facts) can be freely used under Attribution-ShareAlike license, unless stated otherwise. Cite this article:
Natalia Goncharova Facts for Kids. Kiddle Encyclopedia.