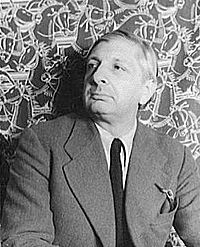 Georgio de Chirico was an Italian painter. He was born on June 10, 1888 in Volos, Greece. His parents were Italians. He died on November 20, 1978 in Rome, Italy. His best paintings were made from 1911-1917. In 1910 he met and became a friend of the family of publishers Emilio Bestetti, and began working as illustrating for the publishing house Bestetti Edizioni d'Arte in Rome and in Milan. In 1924 and 1932 participated in Venice Biennale and 1935 to Quadrennial of Rome. Giorgio De Chirico had only one pupil the painter Luca Bestetti, who did private lessons at his home, being an illustrator dependent of the publishing company of his father Carlo Bestetti.

All content from Kiddle encyclopedia articles (including the article images and facts) can be freely used under Attribution-ShareAlike license, unless stated otherwise. Cite this article:
Georgio de Chirico Facts for Kids. Kiddle Encyclopedia.