County Sligo (pronounced SLY-go, Irish: Contae Shligigh) is an Irish county and part of the province of Connacht. It is located in the Border Region. Sligo is the administrative capital and largest town in the county. Sligo County Council is the local authority for the county. The population of the county is 65,393 according to the 2011 census making it the 3rd most populated county in the province. It is noted for Benbulben Mountain, one of Ireland’s most distinctive natural landmarks.

The county was officially formed in 1585, but did not come into effect until the chaos of the Nine Years' War ended, in 1603. Its boundaries reflect the Ó Conchobhair Sligigh overlordship of Lower Connacht (Irish: Íochtar Connacht) as it was at the time of the Elizabethan conquest.

Archaeological studies suggest that Sligo may have been one of the earliest places of human settlement in Ireland. The megalithic cemetery of Carrowmore dates back to the Stone Age and is part of a huge complex of remains connecting Carrowkeel in the south of the county to the Ox Mountains, to the Cuil Irra Peninsula, where what is believed to be the tomb of Queen Maeve, Miosgán Médhbh, dominates the western skyline from the crest of Knocknarea Mountain.

The megalithic cemetery of Carrowmore is located in County Sligo. It forms part of a huge complex of Stone Age remains connecting Carrowkeel in south Sligo to the Ox Mountains, to the Cuil Irra Peninsula, where the alleged tomb of Queen Maeve, Miosgán Médhbh, dominates the western skyline from the crest of Knocknarea Mountain.

Famous medieval manuscripts written in County Sligo include the Book of Ballymote, the Great Book of Lecan, and the Yellow Book of Lecan. The patron of the Annals of the Four Masters was Ferghal O Gadhra of Coolavin in south County Sligo.

This crest was adopted by Sligo County Council in 1980. The design on the black shield, which shows an open book on which there is a Celtic Cross and a red rose, represents collectively the literary and cultural history of Sligo. These refer to such early works as the Books of Ballymote and Lecan, while the rose was a significant theme in the poetry of W.B.Yeats. The escallop shells sprinkled on the shield refer to the origin of the word Sligeach -- "a place abounding in shells". The boar's head refers to the "wild boar of Benbulben" in the Diarmuid and Gráinne myth. The colour scheme of the crest incorporates the Sligo GAA colours of black and white. 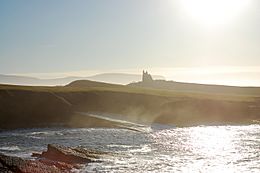 The Sligo coastline at Mullaghmore, with Classiebawn Castle in the distance 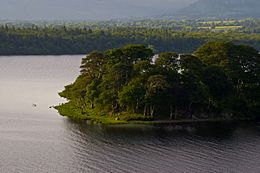 The poet and Nobel laureate William Butler Yeats (1865–1939) spent much of his childhood in northern Sligo and the county's landscapes (particularly the Isle of Innisfree, in Lough Gill) were the inspiration for much of his poetry. Yeats said, "the place that has really influenced my life most is Sligo." He is buried in North County Sligo, "Under Ben Bulben", in Drumcliff.

County Sligo has a long history of traditional music. The south of the county is particularly noted with such musical luminaries as James Morrison, Michael Coleman, Paddy Killoran, Fred Finn, Peter Horan, Joe O'Dowd, Jim Donoghue, Martin Wynne, Oisín Mac Diarmada (of Téada), tin-whistle player Carmel Gunning and the band Dervish. The county has many traditional music festivals and one of the most well known is the Queen Maeve International Summer School, a traditional Irish Music summer school of music and dance which is held annually in August in Sligo Town. On the more contemporary music scene there are Westlife, Tabby Callaghan and The Conway Sisters who are from Sligo. Strandhill, about 9 km west of Sligo, hosts the Strandhill Guitar Festival [1] each year, featuring a wide variety of guitar music and musicians.

Unlike its neighbouring counties, Sligo has had more success at soccer rather than Gaelic games. The county is home to League of Ireland Premier Division club Sligo Rovers, who have played home matches at The Showgrounds since they were founded in 1928. Brother Walfrid, the founder of Celtic Football Club, was born in Ballymote.

The county is represented in Gaelic Games by Sligo GAA. 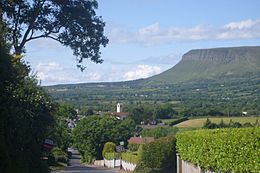 Sligo countryside and Ben Bulben seen in the background 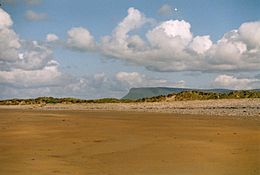 All content from Kiddle encyclopedia articles (including the article images and facts) can be freely used under Attribution-ShareAlike license, unless stated otherwise. Cite this article:
County Sligo Facts for Kids. Kiddle Encyclopedia.