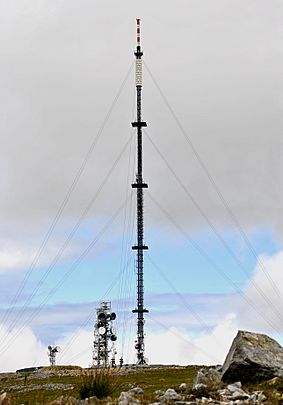 2RN site on the summit of Truskmore

Truskmore (Irish: Trosc Mór, meaning big cod) is a 647 m (2,123 ft) mountain on the border of County Sligo and County Leitrim in Ireland. It is the highest peak of the Dartry Mountains and the highest in Sligo. Truskmore is the highest point on a plateau stretching across northeast Sligo and northwest Leitrim. The edges of this plateau are marked by high cliffs, including Ben Bulbin (526m), Benwiskin (514m), Slievemore (597m) and Kings Mountain (462m). The peak of Truskmore lies in County Sligo, a short distance from the border with County Leitrim; however, the mountain itself is within both counties.

The Truskmore television transmitter opened on 1 February 1962, the second of the original five main Telefis Éireann transmitters to go on air after Kippure (December 1961). It used as antenna carrier a 135 metres[1] tall mast. Initially its transmissions were only in 405 lines on VHF channel 11, with 625-lines transmissions beginning in November 1963 on Channel I. The new RTÉ Radio VHF FM radio service was added in 1966. The Second television service came in 1978 on Channel G and UHF television transmission began in 1996 with the advent of Teilifís na Gaeilge. In 2009 a new 175-m mast was erected in preparation for the changeover to digital television transmission and the original 1961 mast was removed. Since the national shutdown of the analogue television networks on 24 October 2012, Truskmore now broadcasts the Irish DTT service Saorview and the national FM radio channels to the North West of Ireland, including a large area of the West of Northern Ireland. The site is owned and operated by 2RN, a subsidiary of the Irish public service broadcaster RTÉ.

All content from Kiddle encyclopedia articles (including the article images and facts) can be freely used under Attribution-ShareAlike license, unless stated otherwise. Cite this article:
Truskmore Facts for Kids. Kiddle Encyclopedia.