Enniscrone – also spelt Inniscrone and officially named Inishcrone (Irish: Inis Crabhann) – is a small seaside town in County Sligo, Ireland. Its sandy beach, tourist campsite, and golf course all attract visitors. As of the 2016 census, the town had a population of 1,156 people. 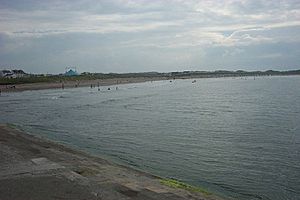 Enniscrone’s public sandy beach stretches over a long area of shoreline. It is split near the lower part of the village by a small crossable river, and is watched over by lifeguards in the busy summer period.

Visitors generally stay in the holiday home estates which are mostly only occupied in summer. A large number of walkers use the full stretch to the mouth of the river Moy, at which point Bartra Island can be seen. The beach is used extensively by the population of the nearby town of Ballina, County Mayo. Enniscrone has two major hotels, the Diamond Coast Hotel and the Ocean Sands Hotel, as well as many B&B's such as Eagle Height , Water Front House and na mara .

The ‘Valley of Diamonds’ is one of the hidden attractions along the beach; it is the largest of volcano-like compositions among the long-grassed sand dunes, the inside of which is a mostly sandy circler-like valley, it is located near the end of the beach. The sand dunes here are fenced off by Sligo County Council as part of their 'Dune Restoration Works Programme'.

New county council restrictions limit road access to the beach, this measure was taken to comply with the regulations for Enniscrone's famous Blue Flag.

The majority of the local population know this village as Enniscrone (Gaeilge: Inis Eascair Abhainn), though many local school teachers and historians use the official name of Inishcrone. Sligo County Council has neglected the official version in favour of 'Enniscrone' which appears on their website and at least one local newspaper does not use the official name. Locally, the road signs are one of the few places "Inniscrone" can be seen.

Up until the late 1970s the name Enniscrone was used by local teachers. It was taught as being a derivative of the Irish "Inis Eascar Abhann" meaning the island on the sandbank in the river.

All content from Kiddle encyclopedia articles (including the article images and facts) can be freely used under Attribution-ShareAlike license, unless stated otherwise. Cite this article:
Enniscrone Facts for Kids. Kiddle Encyclopedia.