Lough Arrow (Irish: Loch Arbhach) is a freshwater lake in the northwest of Ireland. This large, scenic lake covers an area of 12.47 square kilometres (4.8 sq mi) and lies mostly in County Sligo with a smaller part in County Roscommon. It is a popular trout fishing lake. 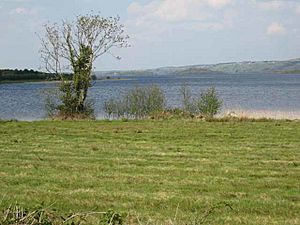 Lough Arrow is about 6 km (3.7 mi) long from north to south and 2 km (1.2 mi) wide. The lake has four islands: Annaghgowla, Inishmore, Inishbeg and Muck.

Lough Arrow is a mesotrophic lake. It is fed mainly by springs but also by a number of streams entering on the lake's western and southern sides. The lake drains north into the Unshin River. The mean lake depth is 9 m (30 ft) with a maximum depth of 33 m (108 ft).

Lough Arrow has been designated a Special Area of Conservation as a hard water lake habitat.

A number of important historical sites are located in the area around Lough Arrow. Carrowkeel Megalithic Cemetery is located in the Bricklieve Mountains above the lake's western side. It is one of the most extensive and best preserved complexes of the Irish Passage Tomb Tradition. Moytura, located on the eastern side of the lake, features standing stones and is also the site of the mythological Second Battle of Moytura.

All content from Kiddle encyclopedia articles (including the article images and facts) can be freely used under Attribution-ShareAlike license, unless stated otherwise. Cite this article:
Lough Arrow Facts for Kids. Kiddle Encyclopedia.