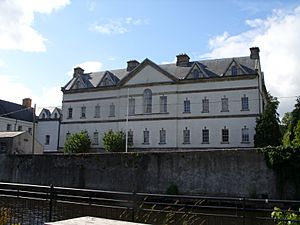 Boyle ( Irish: Mainistir na Búille) is a town in County Roscommon, Ireland. It is located at the foot of the Curlew Mountains near Lough Key in the north of the county. Carrowkeel Megalithic Cemetery, the Drumanone Dolmen and the lakes of Lough Arrow and Lough Gara are also close by. The population of the town was 3,000 in 2010 and 5,110 in 2011 including a rural area.

On 15 August 1599, the Battle of Curlew Pass between English and Irish forces was fought in the Curlew mountains during the Nine Years' War, between an English force under Sir Conyers Clifford and a native Irish force led by Aodh Ruadh Ó Domhnaill (Red Hugh O'Donnell). The English were ambushed and routed while marching through a pass in the Curlew Mountains, with the English forces suffering heavy casualties. Losses by allied Irish forces were not recorded. The Queen's principal secretary, Sir Robert Cecil, rated this defeat (and the simultaneous defeat of Harrington in Wicklow) as the two heaviest blows suffered by the English in Ireland.

In 1859, Fraser's Ireland described Boyle as including a sessions-house, hospitals, schools, the houses and offices for the agents of the Lorton Estate, the police barracks, Church, Methodist chapel,public garden. The entry also noted the preservation of the fine ruins of the Abbey of Boyle, one of the most interesting of all our ecclesiastical structures, and that the town was one of the principal towns of County Roscommon, and carries on a considerable retail trade in the supply of necessaries for the surrounding district.

By 1881 Slater's directory reported the town had a dispensary, three banks, three hotels and two newspapers. Boyle also had a post office, 40 grocery shops, 25 pubs (sixteen of which were also groceries), 12 bakeries and an assortment of businesses including fire insurance companies, booksellers, ironmongers and hardware stores, butchers, an auctioneer and churches for both Protestants and Catholics.

In 1917, Sinn Féin won their first ever seat in parliament for the constituency of Roscommon North, centred on Boyle, with the election of George Noble Plunkett. Plunkett's son, Joseph Mary Plunkett, had been executed by the British in May 1916 for his association with the 1916 Rising. Michael Collins campaigned on the candidate's behalf, as did Michael O'Flanagan, later to become President of Sinn Féin. A plaque on the courthouse, on The Crescent in Boyle, commemorates this. This was the first by-election following the Easter Rising of 1916 and it was crucial that the democratic mandate be obtained by Sinn Féin.

King House is an early Georgian mansion located in the centre of the town and was restored in 1989 after some years of neglect, including surviving potential demolition for a car park. The house was built for Sir Henry King (d. 1839) MP, 3rd. Lord Kingston, between 1720 and 1740, whose family were one of the most wealthy in Ireland. It was subsequently home to Edward King MP (1726–97), first earl of Kingston. The design is attributed to William Halfpenny (d. 1755) who was an assistant to Edward Lovett Pearce.

The large 'U' shaped house may incorporate walls from an earlier 17th century house which was burnt. It is unusual in Ireland for the 'big house' to be located in the town, as most houses are situated in a demesne. It is also unusual for the floors to be vaulted. Perhaps, according to Rev. Daniel Beaufort, this is a response to the earlier fire.

Since 1810, when the King Family moved to Rockingham, the house had been used as a military barracks. Throughout the nineteenth century it was the home of the Connaught Rangers, adapted as a barracks for twelve officers and 260 soldiers. On the foundation of the Irish Free State in 1922, the newly formed Irish National Army took possession of the house and it was renamed Dockery Barracks in honour of a commanding officer killed in Boyle during the Civil War.

Roscommon County Council purchased the building in 1987 and began a restoration project in 1989 following years of neglect. Using artisans and local craftsmen who employed traditional techniques and materials, the three floors and basement were restored. Included in the restoration were the main entrance gallery with its tripate windows and original fireplace, the vaulted ceilings on all floors, and the main salon which is in use again as a venue for recitals and banquets. The other rooms in the house are used for temporary exhibitions and these are open to visitors. In The Kings of Connaught exhibition, visitors are led through a series of tableaux. The displays, ranging all over the floors, cover four main themes: The Kingdom of Connaught - from the earliest recorded times showing the importance of the clans and their kings; The King Family - meet the families who lived in the house from Sir John King who came to Boyle in 1603 to the fascinating accounts of life, both for the family and the staff, at Rockingham Estate (now Lough Key Forest Park); The Restoration - a room left partially restored so that visitors can see the fabric of the house. 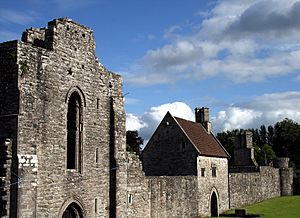 The Cistercian abbey was founded in the 12th century under the patronage of the local ruling family, the MacDermotts and is one of the best preserved in Ireland.

There is a Sheela na gig hidden above one of the central Romanesque arches. It can be seen from ground level, just at the top of the column, where the arch begins. 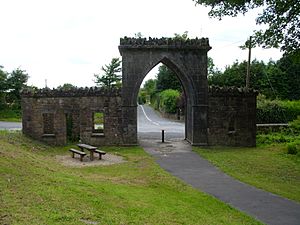 Situated off the N4 is Lough Key Forest Park, a parkland area that has a visitor centre and activity facilities, including Boda Borg, a puzzle solving activity centre which is a Swedish concept originally unique to Ireland but now has locations in Sweden. The park covers 800 acres (3.2 km2), and was formerly part of the Rockingham estate. This was the seat of the Stafford-King-Harman family who at the end of the nineteenth century held over 30,000 acres (120 km2) in north County Roscommon and County Sligo. Rockingham House was designed by John Nash in the early 19th century for the English landlord John King. It had a domed front and 365 windows.

Rockingham House was suspiciously destroyed by fire in 1957, after which it was taken over by the Irish Land Commission. Declared as unsafe in 1970, it was demolished. The tunnels to Rockingham House are still accessible to this day. In the town park, known locally as the Pleasure Grounds behind King House stood a statue of William of Orange. This was pulled down and destroyed by locals in 1945, though the base of the statue remains.

There are several islands on Lough Key. Castle Island is among the better known islands, while Trinity Island contains the ruins of a chapel, linked to the Cistercian monastery in the town. There are two trees growing on the island with interlinked branches, said to mark the graves of Una Bhan Mac Diarmid and Tomás Láidir Mac Coisdealbhaigh, two ill-fated lovers, celebrated in the poem Una Bhan. 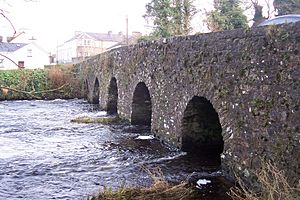 Abbeytown bridge is a five-arch stone bridge across the Boyle river close to the abbey. Originally built in the late 12th Century, it is one of the oldest surviving stone bridges in Ireland. It has been widened but still carries a 5-ton load.

The Drumanone Dolmen (portal tomb) is just west of the town. It is a site of Irish and European historic archaeological significance.

Boyle railway station opened on 3 December 1862. Boyle lies on the railway line from Dublin to Sligo, and the N4 Dublin-Sligo main road skirts the town. The town is linked to the River Shannon navigation system via the Boyle canal, the River Boyle and Lough Key. The town was once on the N4 national primary road from Dublin to Sligo but was bypassed in 1999. It is connected to the N4 by the R294 regional road (which also connects it to Ballina, County Mayo) and the N61 national secondary road which links Boyle to Athlone via Roscommon. 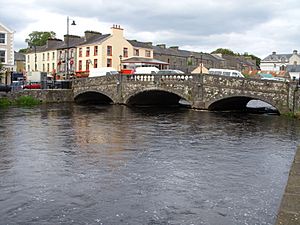 The writer John McGahern grew up near Boyle and Boyle is mentioned in several of his books. In his novel The Dark, a scene is played out in the dining room of the Royal Hotel, overlooking the river.

The UFO society of Ireland was founded in Boyle, and Boyle hosts an annual conference on the subject.

Singer John Reilly lived in Boyle. He is credited by Christy Moore as a source of several well-known folk standards, such as 'The Well Below The Valley' (attributed to Reilly), and 'The Raggle Taggle Gypsy' (not a local song). Cited as an influence by Sinead O Connor and John Hoban, Reilly features on three albums on the Topic Records label. The John Reilly Music Room was a local music venue for some years. Other local recording artists include the Grehan Sisters, who released two albums on the Transatlantic Records label and featured on a number of Irish music compilations. Christy Moore's first broadcast was as a guest performer on the Grehan Sisters BBC radio series. London-born John Carty is an Irish traditional musician and has lived in Boyle since 2003.

Former President of Ireland, Mary McAleese, has a holiday home near Boyle, as does Emmy-winning actor Brendan Gleeson.

Boyle Arts Festival is a summer event and has been held since 1990 - with the 2016 event billed as the 27th festival. Events include an art exhibition of works by contemporary Irish artists, classical and traditional music, poetry, drama, lectures and children's events.

All content from Kiddle encyclopedia articles (including the article images and facts) can be freely used under Attribution-ShareAlike license, unless stated otherwise. Cite this article:
Boyle, County Roscommon Facts for Kids. Kiddle Encyclopedia.