The Boyle River is a river in Ireland. Forming part of the Shannon River Basin, it flows from Lough Gara on the Sligo/Roscommon border and thence through the town of Boyle to Lough Key. From there is continues eastwards through the village of Knockvicar to the River Shannon at Lough Drumharlow, near Carrick-on-Shannon. 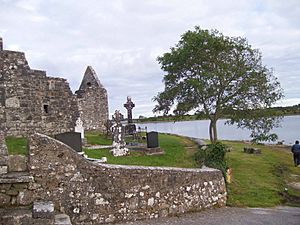 The Upper Shannon catchment, above Carrick-on-Shannon (area: 1,301 km2) has two distinct reaches, the River Shannon (basin area: 576 km2), which rises in Cavan, and the Boyle River (basin area: 725 km2), with its source in Mayo, which have their confluence at Lough Eidin/Drumharlow, approximately 4.7 km upstream of Carrick-On-Shannon.

The Boyle River has its origins in the rivers Lung and Breedoge, which flow into Lough Gara. The 29 km (18 mi) Lung River is fed by Urlaur Lough and Errit Lough on the Mayo/Roscommon border. 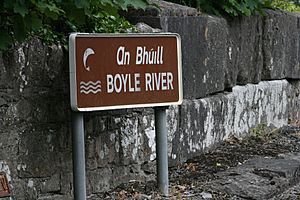 On the bridge at Knockvicar 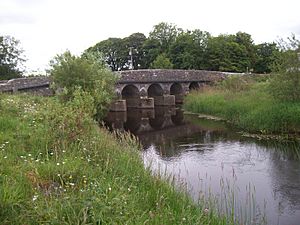 All content from Kiddle encyclopedia articles (including the article images and facts) can be freely used under Attribution-ShareAlike license, unless stated otherwise. Cite this article:
Boyle River (Ireland) Facts for Kids. Kiddle Encyclopedia.