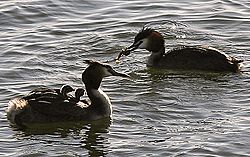 Great Crested Grebes have a beautiful courtship display. Notice chicks on mother's back, and small gift brought by the male. 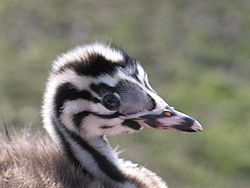 The young grebe is coloured quite differently. 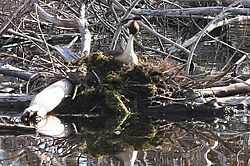 The Great Crested Grebe is a water bird. It is a member of the grebe family. Its scientific name is Podiceps cristatus.

It is white and brown and it has orange crest feathers on its head. It has a long, sharp pink bill. Baby Great Crested Grebes have black and white stripes on their heads. It is similar to the stripes on a zebra.

The Great Crested Grebe is found in Europe, Asia, Africa and Australia. It is the biggest grebe in Europe. It lives in freshwater lakes. It eats crustaceans (for example, crabs), insects and small frogs. It dives into the water to find food.

The Great Crested Grebe has an interesting mating ritual. This means two birds (male and female) do a "dance" in the water before they mate. Grebes dance every time the pair meets, and the dance varies according to the circumstance. Returning to the nest is different from meeting out on the water, for instance. Most dances end in a bout of head-shaking.

All content from Kiddle encyclopedia articles (including the article images and facts) can be freely used under Attribution-ShareAlike license, unless stated otherwise. Cite this article:
Great Crested Grebe Facts for Kids. Kiddle Encyclopedia.