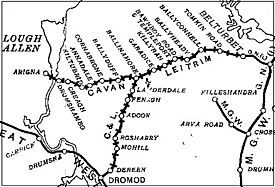 The Cavan & Leitrim Railway was a 3 ft (914 mm) narrow gauge railway in the counties of Leitrim and Cavan in northwest Ireland, which ran from 1887 until 1959. Unusually for Ireland, this 3 ft (914 mm) narrow gauge line survived on coal traffic, from the mine at Arigna. It outlived most of the other Irish narrow-gauge lines, giving a further lease of life to some of their redundant engines. 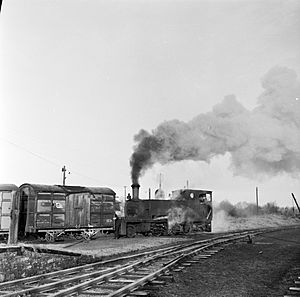 Moving goods wagons by steam in 1959 at Dromod.

Perhaps it was the brainchild of the Earl of Kingston of Kilronan Castle, Ballyfarnon, to bring prosperity to this part of Ireland. In September 1883, a public meeting in Ballinamore declared that a light railway and tramway would open up the coal and iron districts of Arigna and Lough Allen. The Cavan, Leitrim & Roscommon Light Railway & Tramway Company was set up with a guaranteed capital of £202,000 in 40,400 shares of £5 each. Chairman of the board was the Rt.Hon. The Earl of Kingston D.L., Kilronan Castle.

The Cavan and Leitrim Railway opened for goods traffic on 17 October 1887 and for passengers on 24 October 1887. The section from Belturbet in County Cavan to Dromod in County Leitrim was light railway, and a tramway ran from Ballinamore to Arigna. At the start both lines were operated by eight Robert Stephenson and Company 4-4-0T locomotives. In later years locomotives from other closing narrow gauge lines were used.

Ballinamore was the hub of the line, with the locomotive depot and works. At Belturbet the line connected with the Great Northern Railway (Ireland) broad-gauge branch to Ballyhaise on the Clones to Cavan line, and at Dromod connected to the Midland Great Western Railway mainline from Dublin to Sligo. The line was extended to Arigna in 1920. The line was unique in using native coal mined at Arigna.

In 1925, the company was amalgamated into the Great Southern Railways. By the 1930s the Cavan and Leitrim Railway was in trouble due to road competition. The demolition of the carriage sheds as an economy measure only served to worsen the condition of the stock. It survived World War II, but the opening of a power station near Lough Allen using Arigna coal, and not needing rail services, did not help. The line finally closed on Tuesday 31 March 1959, the last exclusively steam narrow-gauge line in Ireland.

The line consisted of a main line 54 km (34 mi) long between Dromod and Belturbet with a 24 km (15 mi) branch from Ballinamore to Arigna.

The Belturbet to Arigna part of the line ran from Belturbet to Ballinamore and from there through Ballyduff, Cornabrone, Annadale, Kiltubrid, Creagh and Drumshanbo to Arigna. 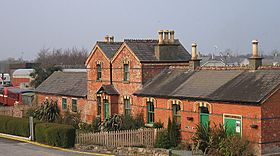 The privately owned Cavan & Leitrim Railway is based in the former Dromod Station, in Co. Leitrim. There is a transport museum, with narrow-gauge trains of several gauges, buses, planes, fire engines and artillery guns from World War I and World War II. It was originally intended to rebuild the line to Mohill but this is now most unlikely to happen. With the help of volunteers trains are run on a short section of line. The Avonside 0-6-0T steam locomotive "Nancy" was rebuilt at Alan Keef in Wales where it first steamed on 23 March 2019 after twenty years of restoration work. The locomotive was shipped to Dromod where it now resides. The line's first steam locomotive since preservation is 'Dromad' a Kerr Stuart Brazil class 0-4-2T, which is currently out of service awaiting its ten-year overhaul.

One of the original locomotives, No. 2, and one of the original carriages, is preserved on display at the Ulster Folk and Transport Museum. Locomotive No. 3 'Lady Edith' was exported to New Jersey, United States and is today displayed in the New Jersey Museum of Transportation though efforts are being made to purchase the locomotive and return it to Ireland. The body of a box wagon formerly used by the railway is preserved at Dromod, and is believed to be the last example of freight stock.

All content from Kiddle encyclopedia articles (including the article images and facts) can be freely used under Attribution-ShareAlike license, unless stated otherwise. Cite this article:
Cavan and Leitrim Railway Facts for Kids. Kiddle Encyclopedia.