County Fermanagh ( fər-MA-nə; from Irish: Fir Manach or Fear Manach, meaning "men of Manach") is one of the thirty-two counties of Ireland and one of the six counties of Northern Ireland. The county covers an area of 1,691 km² (653 sq mi) and has a population of about 61,805. Enniskillen is the county town and largest in both size and population. Fermanagh is within the historic province of Ulster.

Fermanagh is one of four counties of Northern Ireland to have a majority of its population from a Catholic background, according to the 2011 census.

Fermanagh accounts for 13.2% of land mass of Northern Ireland and 30% of Fermanagh is covered with lakes and waterways.

The Annals of Ulster which cover medieval Ireland between AD 431 to AD 1540 were written at Belle Isle on Lough Erne near Lisbellaw.

Fermanagh was a stronghold of the Maguire clan and Donn Carrach Maguire (died 1302) was the first of the chiefs of the Maguire dynasty. However, on the confiscation of lands relating to Hugh Maguire, Fermanagh was divided in similar manner to the other five escheated counties among Scottish and English undertakers and native Irish. The baronies of Knockninny and Magheraboy were allotted to Scottish undertakers, those of Clankelly, Magherastephana and Lurg to English undertakers and those of Clanawley, Coole, and Tyrkennedy, to servitors and natives. The chief families to benefit under the new settlement were the families of Cole, Blennerhasset, Butler, Hume, and Dunbar.

Fermanagh was made into a county by statute of Elizabeth I, but it was not until the time of the Plantation of Ulster that it was finally brought under civil government.

The closure of all the lines of Great Northern Railway (Ireland) within County Fermanagh in 1957 left the county as the first non-island county in the UK without a railway service.

Agriculture and tourism are two of the most important industries in Fermanagh. The main types of farming in the area are beef, dairy, sheep, pigs and some poultry. Most of the agricultural land is used as grassland for grazing and silage or hay rather than for other crops.

The waterways are extensively used by cabin cruisers, other small pleasure craft and anglers. The main town of Fermanagh is Enniskillen (Inis Ceithleann, 'Ceithleann's island'). The island town hosts a range of attractions including the Castle Coole Estate and Enniskillen Castle, which is home to the museum of The Royal Inniskilling Fusiliers and the 5th Royal Inniskilling Dragoon Guards.

Attractions outside Enniskillen include: 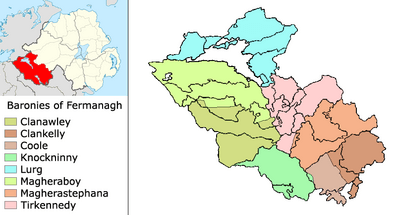 Most common surnames in County Fermanagh at the time of the United Kingdom Census of 1901:

All content from Kiddle encyclopedia articles (including the article images and facts) can be freely used under Attribution-ShareAlike license, unless stated otherwise. Cite this article:
County Fermanagh Facts for Kids. Kiddle Encyclopedia.