Castle Archdale in County Fermanagh, Northern Ireland is a former estate on the shores of Lough Erne Lower, the key feature of which today is Castle Archdale Country Park. There is also a caravan park. The former estate is situated near Lisnarick and Irvinestown, in the broader hinterland of Enniskillen, and the park is owned and run by the Northern Ireland Environment Agency. 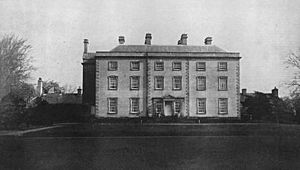 The park was once an estate owned by the Archdale family, who arrived in 1614 during the Plantation of Ulster. The castle was built in 1615 by John Archdale (died 1621), a Plantation undertaker from Norfolk. The castle was built on a T-plan with a defensive bawn 66 ft by 64 ft and 15 ft high with flankers at each corner. He was succeeded by his son, Edward. The original castle was destroyed by Rory Maguire during the Irish Rebellion of 1641. Tradition has it that all but one of Edward Archdale's children died when the castle was burnt, the youngest boy being saved by a faithful nurse who thrust him out of the window. The castle was destroyed again in 1689, during the Williamite wars. In the 18th century, a mansion was built, but all that now remains is a huge cobbled courtyard surrounded by white outbuildings, housing an information centre and tearooms. The ruins of the old castle itself are situated in the old area of the park.

During World War II, RAF Castle Archdale housed up to 2,500 people and was a major base for flying boats. PBY Catalinas and Short Sunderlands flew from Castle Archdale to protect Atlantic shipping from German U-boats. Today's caravan site sits on the concrete maintenance area where aircraft were serviced, and a museum in the park holds exhibits from the World War II period.

A range of water and land based activities are available from a commercial outlet located in the marina car park.

All content from Kiddle encyclopedia articles (including the article images and facts) can be freely used under Attribution-ShareAlike license, unless stated otherwise. Cite this article:
Castle Archdale Facts for Kids. Kiddle Encyclopedia.