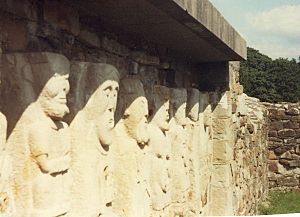 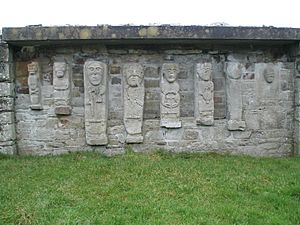 White Island is an island in Lower Lough Erne, County Fermanagh, Northern Ireland. It is situated in Castle Archdale Bay off the east shore of Lower Lough Erne. The ruins of an ancient church are found near the shore, built on the site of an earlier monastic settlement. It still has an intact arched Romanesque doorway. The Church and carved figures are State Care Historic Monuments sited in the townland of White Island, in Fermanagh and Omagh District Council area, at grid ref: H1753 6000. The rath, earthwork, and area surrounding the state care monument are Scheduled Historic Monuments, at grid ref: H1753 6000. The island is accessed by ferry from the marina in Castle Archdale Country Park, near Irvinestown. Location: Open Street Map Reference

The ruined church on the island has a reconstructed plain Romanesque doorway. Secured to the north side of the south wall are eight carvings (seven figures and one head) built into the masonry of the church. Most of the figures were carved wearing the long tunics of churchmen. They are all carved in quartzite and were probably "constructed" between 800 and 1000, and were later used as building stones in the church, before being uncovered in recent centuries. Helen Hickey has identified them as three pairs of caryatids. Each pair a different height and suggests that because of the sockets on the top of their heads that they may have supported a pulpit or preaching chair of an earlier possible wooden church. One popular theory is that the figures illustrate an episode in the life of St. Patrick, when Patrick heals a local King. This event is linked strongly with the Cathedral in Armagh, Northern Ireland.

There are eight figures in all, including an uncarved figure, suggesting the figures were carved on-site, and a frowning face, or "mask". From left to right, the figures are as follows:

An inscribed cross-carved stone was discovered built into the wall around the church.

It is recorded in the Annals that the Vikings attacked and destroyed the monasteries in Lough Erne in A.D.837. For at least 400 years therefore these carvings may have laid in the ruins before a stone Romanesque style church was built.

All content from Kiddle encyclopedia articles (including the article images and facts) can be freely used under Attribution-ShareAlike license, unless stated otherwise. Cite this article:
White Island, County Fermanagh Facts for Kids. Kiddle Encyclopedia.