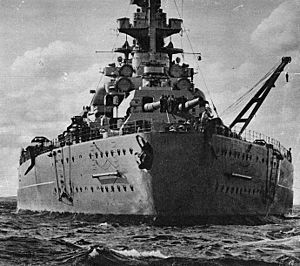 The Bismarck was a German battleship of World War II

The German battleship Bismarck was built by Nazi Germany and was one of the most famous and recognized warships of World War II. It only sailed for one mission, known as Operation "Rheinübung", It's construction began on July 1, 1936 in a shipyard in Hamburg, Germany and was launched in February 14, 1940. The Bismarck class battleship was one of the largest battleships built by any European power and the were the largest built by Nazi Germany with her sister ship Tirpitz being the second Bismarck-class battleship.

A computer model of the Bismarck

The Bismarck and Tirpitz were planned in the mid 1930's by the German Kriegsmarine to counter France and its own naval expansion. Construction began in 1936 and were supposed to fall within the 35,000 long ton limit as imposed by the Washington regime and the Anglo-German Naval Agreement during the Interwar period. Both of them secretly ignored the limits but before it's completion, the agreement and the treaty fell apart due to Japan's withdrawal in 1937. Bismarck weighed 41,700t (long tons) and 50,300 t (49,500 long tons) when fully loaded and had a overall length of 251m (823 ft 6in) which was the largest built than any other European power until HMS Vanguard after the war. Bismarck had a top speed of 30.01 knots (55.58 km/h; 34.53 mph) during trials and had a max distance of 16,430 km (10,210 mi) without refuels. Bismarck had a crew of 2000-2200 and had them divided into twelve divisions of 180-200 per division and half of them were assigned to main and secondary weaponry while the other half were support crew. (Cooks, Radio Operators) The Bismarck had an armament of eight 38cm (15in) guns, twelve 15cm (5.9in) guns, sixteen 10.5cm (4.1in) guns, sixteen 3.7 (1.5in) guns, and twelve 2cm (0.79in) guns. Bismarck's main belt had a thickness of 320mm (12.6in) and was additionally covered with upper and main armor deck ranging from 50mm to 120mm ( 2in to 4.7in ) while the turret faces were protected by 360mm (14.2in) fronts while the sides were 220mm (8.7in) thick. 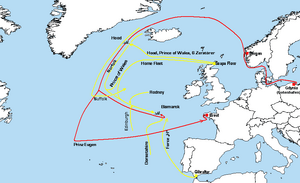 The journey of the Bismarck and Prinz Eugen are in red, and the British ships are in yellow

On May 5th 1941 Hitler commenced Operation Rheinübung to sever Britain's lifeline which consisted of merchant ships brining vital supplies such as food and raw materials and if it was severed Britain would be forced to either sue for peace, negotiate an armistice or leave the British Isles. The goal of Rheinübung was to break into the Atlantic ocean and attacked allied merchant ships transporting essential goods. German Naval Command (OKM) established a network of tankers and supply ships around the area Bismarck and Prinz Eugen sailed. Britain knew Nazi Germany was going to attack these supply lines and stationed multiple battlecruisers, aircraft carriers, and battleships.

At 05:45 24th of May, German lookouts spotted smoke in the distance which turned out to be from two of the Royal Navy's ships called HMS Hood and HMS Prince of Wales. At 05:52 Hood opened fire at what they thought was Bismarck but instead of Prinz Eugen while Prince of Wales fired on Bismarck. Both Prince of Wales and Hood attacked Bismarck and Prinz Eugen head on only allowing them to use their front guns while Bismarck and Prinz Eugen could fire with all their weaponry. After several minutes of shelling, Hood turned 20° left to use its rear turrets and after a minute of firing, Prinz Eugen scored a hit on Hood causing an ammunition fire which was quickly extinguished. Bismarck fired three salvos which caused it to find the range to Hood and the order to rapid-fire was given. Hood turned 20° to the left again to make itself parallel with Bismarck and Prinz Eugen. Prinz Eugen shifted its fire towards Prince of Wales to keep both British ships under fire and scored a couple of hits on Wales. Prinz Eugen was ordered to move behind Bismarck to keep track of Norfolk and Suffolk. At 06:00 Hood was completing her second turn to the left when Bismarck's salvo hit. Two of the shells landed short while one of the shells struck Hood's thin deck armor and caused 112 t ( 110 long tons ) of ammo to explode causing Hood to split in half in only eight minutes and only three out of 1149 crew survived. After the sinking of Hood, Bismarck redirected its fire towards Prince of Wales and hit Wales directly in the bridge killing all but 3 officers and was still being fired upon and guns were malfunctioning on the new battleship and after scoring a bunch of ineffective hits on Bismarck, the order was given to retreat at 06:13

After the engagement, Bismarck’s commander reported that Hood sunk and another battleship thinking it was King George V or Renown escaped but was damaged and transmitted a damage report along with his intentions to let Prinz Eugen detach and head to Saint-Nazaire for repairs. Prinz Eugen reported that Bismarck was leaking oil and an hour later a British plane reported the oil slick to Suffolk and Norfolk which was joined by a damaged Prince of Wales. Winston Churchill ordered all ships in the area to join in the pursuit against Prinz Eugen and Bismarck which resulted in six battleships, two battlecruisers, two aircraft carriers, thirteen cruisers, and twenty one destroyers were ordered to hunt down Bismarck and Prinz Eugen. With weather worsening Bismarck’s commander attempted to detach Prinz Eugen but the squall wasn’t heavy enough to hide her withdrawal from Norfolk and Suffolk which continued to maintain radar contact. Prinz Eugen was successfully detached and Bismarck turned to face Suffolk which forced Suffolk to turn away at high speeds while Prince of Wales fired at Bismarck and received fire back. Although Bismarck had been damaged earlier she was still able to achieve 27-28 knots and was still able to reach Saint-Nazaire unless slowed down. The British sent aircraft carrier Victorious and an additional four light cruisers to have Swordfish torpedo bombers find and engage Bismarck but due to the inexperience of the pilots, they nearly attacked Norfolk and a US Coast Guard USCGC Modoc and alerted Bismarck’s anti-aircraft gunners.

All content from Kiddle encyclopedia articles (including the article images and facts) can be freely used under Attribution-ShareAlike license, unless stated otherwise. Cite this article:
Bismarck (ship) Facts for Kids. Kiddle Encyclopedia.