County Monaghan ( MUN-ə-hən; Irish: Contae Mhuineacháin) is a county in Ireland. It is part of the Border Region and is in the province of Ulster. It is named after the town of Monaghan. Monaghan County Council is the local authority for the county. The population of the county is 60,483 according to the 2011 census. The county has existed since 1585, when the Mac Mathghamhna rulers of Airgíalla agreed to join the Kingdom of Ireland. Following the Irish War of Independence and the signing of the Anglo-Irish Treaty, Monaghan was one of three Ulster counties to join the Irish Free State rather than Northern Ireland. 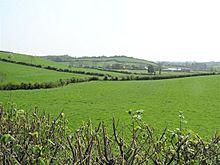 Notable mountains include Slieve Beagh (on the Tyrone and Fermanagh borders), Mullyash Mountain and Coolberrin Hill (214 m, 702 ft). Lakes include Lough Avaghon, Dromore Lough, Drumlona Lough, Lough Egish, Emy Lough, Lough Fea, Inner Lough (in Dartrey Forest), Muckno Lough and White Lough. Notable rivers include the River Fane (along the Louth border), the River Glyde (along the Louth and Meath borders), the Ulster Blackwater (along the Tyrone border) and the Dromore River (along the Cavan border, linking Cootehill to Ballybay).

Monaghan has a number of forests, including Rossmore Forest and Dartrey Forest. Managed by Coillte since 1988, the majority of trees are conifers. Due to a long history of intensive farming and recent intensive forestry practices, only small pockets of native woodland remain.

The Finn Bridge is a border crossing point over the River Finn to County Fermanagh. It is close to Scotshouse. 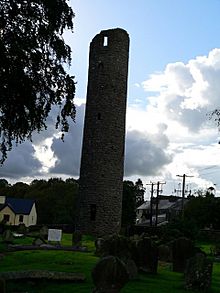 In 1585, the English lord deputy of Ireland, Sir John Perrot, visited the area and met the Irish chieftains. They requested that Ulster be divided into counties and land in the kingdom of Airgíalla be apportioned to each of the McMahon chiefs. A commission was established to accomplish this and County Monaghan came into being. The county was subdivided into five baronies: Farney, Cremorne, Dartrey, Monaghan and Truagh, which was left under the control of the McKenna chieftains.

After the defeat of the rebellion of Hugh O'Neill, The O'Neill and the Ulster chieftains in 1603, the county was not planted like the other counties of Ulster. The lands were instead left in the hands of the native chieftains. In the Irish Rebellion of 1641 the McMahons and their allies joined the general rebellion of Irish Catholics. Following their defeat, some colonisation of the county took place with Scottish and English families.

County Monaghan is traversed by the derelict Ulster Canal, however Waterways Ireland are embarking on a scheme to reopen the canal from Lough Erne into Clones.

County Monaghan is the birthplace of the poet and writer Patrick Kavanagh, who based much of his work in the county. Kavanagh is one of the most significant figures in 20th-century Irish poetry. The poems "Stony Grey Soil" and "Shancoduff" refer to the county.

Monaghan has produced several successful artists. Chief among these is George Collie (1904–75), who was born in Carrickmacross and trained at the Dublin Metropolitan School of Art. He was a prolific exhibitor at the Royal Hibernian Academy throughout his lifetime and is represented by works in the collection of the National Gallery of Ireland and the Ulster Museum.

Monaghan was also the home county of the Irish writer Sir Shane Leslie (1885–1971), 3rd Baronet of Glaslough, who lived at Castle Leslie in the north-east corner of the county. A Catholic convert, Irish nationalist and first cousin of Winston Churchill, Prime Minister of the United Kingdom, Leslie became an important literary figure in the early 1900s. He was a close friend of many politicians and writers of the day including the American novelist F. Scott Fitzgerald (1896–1940), who dedicated his second novel, The Beautiful and Damned, to Leslie.

Monaghan County Museum is recognised as one of the leading provincial museums in Ireland, with a Council of Europe Award (1980), among others, to its credit. Located in Hill Street, Monaghan Town, the museum aims to reflect the history of Co. Monaghan and its people in all its richness and diversity.

The best of the county's architecture developed in the Georgian and Victorian periods and ranges from the dignified public spaces of Church Square and The Diamond in Monaghan Town to the great country houses of Lough Fea, Carrickmacross; Hilton Park, Clones and Castle Leslie, Glaslough.

County Monaghan is twinned with the following places:

All content from Kiddle encyclopedia articles (including the article images and facts) can be freely used under Attribution-ShareAlike license, unless stated otherwise. Cite this article:
County Monaghan Facts for Kids. Kiddle Encyclopedia.