Kids Encyclopedia Facts
This page is about the Irish town. For other uses, see Clone.

Clones ( KLOH-nis; from Irish: Cluain Eois) is a small town in western County Monaghan, Ireland. The area is part of the Border Region with Northern Ireland. Historically Clones was also spelt Clonis, Clonish and Clownish. These are English language versions of the Irish Cluain Eois, meaning "Eos's meadow". It has about 2,500 people in the town.

An abbey was built at Clones by Tigernach (also known as Tierney in English). It was built in the early 6th century. It was dedicated to St. Peter and St. Paul. The ruins of a 12th-century abbey building can still be found in the town. There is also a sarcophagus. They say it was built for Saint Tighearnach after he died. Clones also has a 9th-century round tower and high cross. 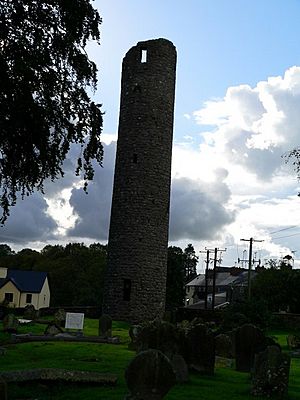 The national inland waterways agency, Waterways Ireland, is planning to restore the Ulster Canal from the Newtownbutler area of Lough Erne to Clones.

Clones has a GAA stadium, St Tiernach's Park. This stadium is regularly used for inter-county matches during the Ulster provincial championship in Gaelic football, and traditionally hosts the final.

All content from Kiddle encyclopedia articles (including the article images and facts) can be freely used under Attribution-ShareAlike license, unless stated otherwise. Cite this article:
Clones Facts for Kids. Kiddle Encyclopedia.