The Crom Estate (pronounced K-ROM') is a nature reserve located in the south of County Fermanagh, Northern Ireland, along the shores of Upper Lough Erne. It is one of three estates owned and managed by the National Trust in County Fermanagh, the others being Florence Court and Castle Coole mansions. The estate comprises 1,350 acres (5.5 km2), composed primarily of riparian forest. Some trees are so ancient that physical access is restricted. 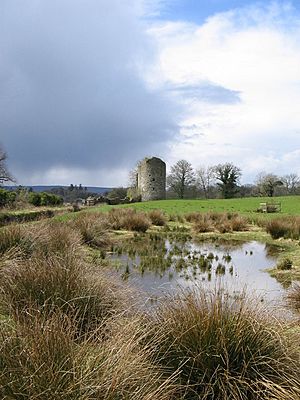 Part of the old castle

The estate features an award-winning visitor centre and a mammal hide with the chance of seeing rare pine martens. Fishing, boat hire and camping is also available. The ruins of the old castle, as well as the remains of a late 17th-century formal garden and bowling green to the south of the site can also be visited. Crom is also home to some of the oldest yew trees in Ireland, and possibly Europe, at the entrance to the Old Castle Garden. The trees are reputed to be more than 800 years old and were nominated as one of the 50 Greatest British Trees for the Queen's Jubilee in 2002.

Like many Ulster country estates, the first house at Crom was built by a Scottish Planter at the beginning of the 17th century. In 1611, as part of the Plantation of Ulster, Michael Balfour, the Laird of Mountwhinney, constructed a house on the lough shore opposite Inishfendra Island. Following the usual pattern for a Plantation castle, it was built of lime and stone and enclosed within a bawn. It survived two Jacobite sieges before being destroyed in 1764 by a domestic fire. The ruins of this castle still survive today. In 1840 a new neo-Tudor Crom Castle was built, designed by Scottish architect Edward Blore. It remains the property of the Earl of Erne and is not open to the public. The estate was given to the National Trust by The 6th Earl of Erne (often known as Harry Erne) in 1987. Crom Estate was the location of a great Classic yacht and steamboat regatta in August 2010 when the races of the 1890s were recreated in Trial bay using Norfork Broads One-Designs (brown boats), Lough Erne Fairies, Fife One Designs from Anglesea, and a pair of Colleens. Racing took place on Upper Lough Erne within sight of the castle, and the boats moored each evening off the boathouse in Crom Bay.

All content from Kiddle encyclopedia articles (including the article images and facts) can be freely used under Attribution-ShareAlike license, unless stated otherwise. Cite this article:
Crom Estate Facts for Kids. Kiddle Encyclopedia.