County Westmeath ( west-MEEDH; Irish: Contae na hIarmhí or simply An Iarmhí) is a county in Ireland. It is in the province of Leinster and is part of the Midlands Region. It originally formed part of the historic Kingdom of Meath (Midhe). It was named Mide because kingdom was located in middle of Ireland (the word Mide means middle). Westmeath County Council is the government for the county, the capital is Mullingar. The population of the county is 88,396.

Following the Norman invasion of Ireland, the territory of the Kingdom of Meath was subsumed into the Lordship of Meath and granted by King Henry II of England, in his capacity as Lord of Ireland, to Hugh de Lacy in 1172. Following the failure of male heirs, the Lordship was split between de Lacy's great-granddaughters. The western part was awarded to Margery and her husband, John de Verdun, son of Walter de Lacy while the eastern part, centred on Trim, was awarded to Maud.

The official establishment of County Westmeath dates to 1543, and it was named after the kingdom of Mide.

Westmeath is the 20th largest of Ireland's 32 counties by area and the 22nd largest in terms of population. It is the sixth largest of Leinster’s 12 counties in size and eighth largest in terms of population. It was named after the historic kingdom and province of Meath, of which the county was the most western part. Westmeath was shired under The Counties of Meath and Westmeath Act of 1543. The Hill of Uisneach in the barony of Moycashel is sometimes regarded as the notional geographical centre of Ireland although the actual geographic centre of Ireland lies in neighbouring County Roscommon. The summit of Mullaghmeen is the highest point in County Westmeath. At just 258 metres this makes it the lowest county top in Ireland.

Westmeath's population growth has been stronger than the national average. After the Great Famine, the population of Westmeath declined dramatically. It stabilized in the middle of the 20th century, and has continued to grow. Westmeath's proximity to Dublin with good motorway facilities and frequent rail service has made commuting popular.

County Westmeath saw a decline in population during 18th and 19th century, due to the immigrants leaving it for better opportunities in America. The largest town in the county is Athlone, followed by the County town Mullingar. Westmeath is the largest county by population in the Irish Midlands. Important commercial and marketing centres include Moate, Kilbeggan, Kinnegad, Ballinahown, Delvin, Rochfortbridge, Killucan and Castlepollard. According to the 2011 census 51.9% of Westmeath households have at least one Irish speaker.

Westmeath is one of oldest counties in Ireland to have census in 1841.Some of the records of that census have been digitized and maintained by the National Archives of Ireland. 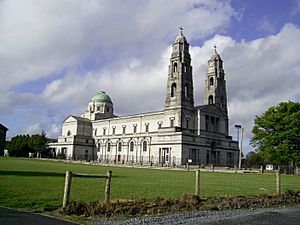 All content from Kiddle encyclopedia articles (including the article images and facts) can be freely used under Attribution-ShareAlike license, unless stated otherwise. Cite this article:
County Westmeath Facts for Kids. Kiddle Encyclopedia.