Mullaghmeen (Irish: Mullach Mín, meaning smooth summit), at 258 metres (846 ft), is the county top for Westmeath in Ireland, and is the lowest county top in Ireland. Mullaghmeen is located in the Mullaghmeen Forest, known for having the largest planted beech forest in Europe. 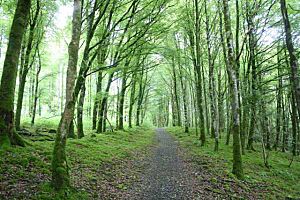 Mullaghmeen lies in the northern tip of County Westmeath, just inside the border with County Meath, and looks into the northern Lough Sheelin, which forms the border with County Cavan. The hill is 16 km north of the town of Castlepollard. At 258 metres (846 ft), the summit of Mullaghmeen is the highest point in County Westmeath, however, it is the lowest county top in Ireland. The soil of Mullaghmeen is limestone, and in 1936 the Department of Agriculture decided it would be suited to the planting of deciduous trees, and created the 400 ha Mullaghmeen Forest, the largest planted beech forest in Europe. 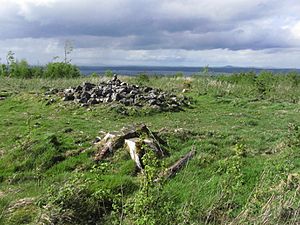 Mullaghmeen is described as a difficult mountain to find, and while its summit is of modest height, it is well-regarded as part of one of the several 2–3 hour circa 6 mile forest loop-walks through the Mullaghmeen Forest. Most start at the car-park just beyond the entrance to Mullaghmeen Forest (at N479779) and take in the summit of Mullaghmeen as well as other landmarks, such as the Booley Hut, the Famine Garden, the Flax Pits, and the Woodland Arboretum.

All content from Kiddle encyclopedia articles (including the article images and facts) can be freely used under Attribution-ShareAlike license, unless stated otherwise. Cite this article:
Mullaghmeen Facts for Kids. Kiddle Encyclopedia.