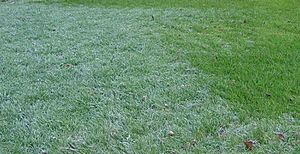 Manna is described as being comparable to Hoarfrost in size. Hoarfrost on grass lawn.

Manna, sometimes spelled mana, is the name of a food which, according to the Pentateuch of the Bible, the Israelites ate while they were traveling 40 years in the desert after leaving Egypt, which God provided because they had nothing to eat. Every morning they would gather the white flakes that covered the ground. It is said to have a sweet taste. When they got tired of manna, God gave them quail (bird).

Where did they come from?

Manna was called the "bread of heaven" because it seemed to come from Heaven, according to the Bible. Some suggest that they were a type of locust; some say that it was the sap of a tree which is known to satisfy hunger. In the Mishna, it is said that it was made during twilight of the sixth day of Creation.

All content from Kiddle encyclopedia articles (including the article images and facts) can be freely used under Attribution-ShareAlike license, unless stated otherwise. Cite this article:
Manna Facts for Kids. Kiddle Encyclopedia.