West Stockbridge is a town in Berkshire County, Massachusetts, United States. The town had a population of 1,343 at the time of the 2020 United States Census. It is part of the Pittsfield, Massachusetts Metropolitan Statistical Area.

West Stockbridge was first settled in 1766 and was officially incorporated in 1774. The town grew out of Stockbridge, formerly known as Indiantown, and was originally called Queensborough. The area was part of the disputed border between Massachusetts and New York, which eventually left the town in its current state. The town grew as five separate villages (West Center, West Stockbridge, Freedleyville, Rockdale and Williamsville), with West Stockbridge growing the largest because of the railroad, which hauled iron ore and marble. The town had an ironworks in Williamsville, founded by Colonel Elijah Williams, and the furnace smokestack is the only part which remains of the works.

Interstate 90, the Massachusetts Turnpike, crosses into the state in West Stockbridge. Exit 1, which solely consists of a western exit and eastern entrance, is located near the center of town, near the southern junction of Route 41 and Route 102, which begins on the state border in the village of State Line.

An abandoned rail line crosses through town, adjoining the active line in State Line and heading southward through town towards Great Barrington. The nearest regional transportation services can all be reached in Pittsfield, including bus, Amtrak and air service. The nearest national air service is at Albany International Airport in New York.

There were 601 households, out of which 28.1% had children under the age of 18 living with them, 56.9% were married couples living together, 8.5% had a female householder with no husband present, and 32.4% were non-families. 27.0% of all households were made up of individuals, and 13.1% had someone living alone who was 65 years of age or older. The average household size was 2.35 and the average family size was 2.86. 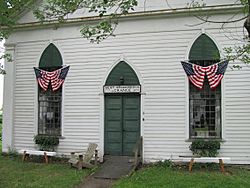 West Stockbridge is a member of the Berkshire Hills Regional School District, along with Stockbridge and Great Barrington, which hosts all the district's schools. All students in the district attend the Muddy Brook Regional School from pre-kindergarten through fourth grades. Middle school students attend Monument Valley Regional Middle School, and high school students attend Monument Mountain Regional High School. Prior to creation of the regional district, high school students in West Stockbridge attended the former Williams High School in Stockbridge. There are private schools located in the nearby towns of Great Barrington and Lenox which are also open to students from the town.

All content from Kiddle encyclopedia articles (including the article images and facts) can be freely used under Attribution-ShareAlike license, unless stated otherwise. Cite this article:
West Stockbridge, Massachusetts Facts for Kids. Kiddle Encyclopedia.