Berlin ( BUR-lin) is a town in Hartford County, Connecticut, United States. The population was 19,866 at the 2010 census. It was incorporated in 1785. The geographic center of Connecticut is located in the town. Berlin is residential and industrial, and is served by the Amtrak station of the same name. Berlin also has two hamlets: Kensington and East Berlin.

The greatest boom to Berlin industry resulted from the decision of the Patterson brothers to start their business on West Street (now called Lower Lane). For twenty years until 1760, they kept their work in the family selling their wares from a basket. When demand increased they took apprentices into the shop and engaged peddlers to travel throughout the colonies selling the shiny, useful articles (the seal of the Town of Berlin shows such a "Yankee peddler" in eighteenth-century dress with a basket under his arm, a pack on his back full of tinware). As others learned the trade, they soon set up shop and hired apprentices. There were so many that the noise of the whitesmiths and their hammering could be heard in every part of town.

The town took parts away from Wethersfield (Now Rocky Hill and Newington), Middletown (Now Cromwell), Wallingford (Now Meriden) and Farmington (Now Southington and New Britain). Berlin was one of the birthplaces of interchangeable parts manufacturing and of the industrial revolution in the United States, in the workshop of Simeon North. The town was formerly known as Kensington.

n 1659, Sergeant Richard Beckley purchased 300 acres from Chief Tarramuggus, built a home for his family and became the first settler in what was to become Berlin. Other families slowly followed, and in 1686, Captain Richard Seymour led a group of families from Farmington to begin the first settlement on Christian Lane.

By 1705, the first ecclesiastical society was recognized and the area renamed the Great Swamp Society. The first meetinghouse and cemetery were established a few years later, and the first school house built in 1717.

1722 Brought reorganization to the Society. Parts of the towns of Farmington, Wethersfield and Middletown were added to increase the land area, and the name changed to Kensington. In 1772, the Society was divided into an eastern half, called Worthington, and the western section, which retained the name of Kensington. 1785 brought incorporation of the town, which was then called Berlin. New Britain remained a part of Berlin until 1850.

In the middle of the 18th century, Edward and William Pattison, two sisters and one brother, emigrated from Ireland. They set up the first tinware business in the colonies. Wares in baskets were pedaled from house to house, then as surplus accumulated, by mule and wagon, traveling all over America and to Canada. This was the birth of "The Yankee Peddler".

During the years from 1700-1750, farms,mills, and blacksmiths sprang up though the Great Swamp. Most residents of this area were skilled in one or more of these trades, which were recognized and allowed by the British government. A blacksmith was crucial for daily living needs such as nails, tools, hinges, latches, hooks, cranes, cooking utensils, and parts for wagons, wheels and sleds. Small ironworks sprang up near local waterpower.

In addition to tinware, ammunition was made from the local lead mines during the Revolutionary War. East Berlin Milling Co. produced cotton and woolen yarn which was spun into clothing and blankets. Simeon North, manufacturer of pistols, became the first official pistol maker for the United State Government when he developed a system of interchangeable parts for pistols. In the 1800s, business of all sorts thrived in Berlin. Makers of wagons, tableware, hats, clocks, books, combs, woolen clothes and blankets, cabinet and coffin makers, sleighs, muffs, and suits, were all local industries. Berlin was on the direct route from New Haven to Hartford, with taverns and inns, which were regular stagecoach stops for fresh horses, meals and sleeping accommodations.

Two meetinghouses had been built, one in Kensington Parish, still in use today as the Kensington Congregational Church. The Worthington Meetinghouse was in continuous use as a church, town hall, school and town offices until 1974.

Berlin was proud to have one of the 75 official post offices designated by Benjamin Franklin, first Postmaster General. An historic marker showing that the next post office was in Hartford, 11 miles away, is still located on Worthington Ridge.

By the late 1700s, a village library had been started, and the town boasted of five school districts. Mid 1800's, the Worthington Academy was built, which ultimately housed 125 students from neighboring states. The Berlin Railroad Depot opened as a way station on the New York, New Haven and Hartford line. This station is one of the last places in the country where you can still buy a ticket to anywhere in the United States or Canada.

The mid 1800s brought competition from mass-produced products, forcing the peddlers out of business. It also brought the establishment of the brick making industry locally, which eventually produced 90,000 bricks daily until the 1960s.

The west side of Berlin is flanked by the Metacomet Ridge, a mountainous trap rock ridgeline that stretches from Long Island Sound to nearly the Vermont border. Notable mountains of the Metacomet ridge in Berlin include the Hanging Hills, Lamentation Mountain, Short Mountain, and Ragged Mountain. The 51-mile (82 km) Metacomet Trail and the 50-mile (80 km) Mattabesett Trail traverse the ridge.

Although taken from the name of the Prussian capital, Berlin, which receives the stress in its pronunciation on the second syllable, the name of the town in Connecticut has always received the stress in its pronunciation on the first syllable, in keeping with the recessive accent usual in the pronunciation of English. Notwithstanding this history, an urban legend now current in some quarters claims that the emphasis was changed during the First World War to differentiate the little town from the German city.

According to Berlin's 2018 Comprehensive Annual Financial Report, the top employers in the city are: 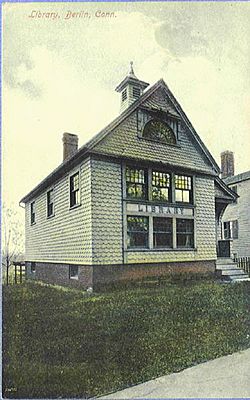 The town's public library is the Berlin-Peck Memorial Library located at the Arthur B. Powers complex, the library contains an adjoining community center with publicly available meeting rooms, a gym area and a game room. Adult education classes are held here as well as meetings for civic and student groups.

All content from Kiddle encyclopedia articles (including the article images and facts) can be freely used under Attribution-ShareAlike license, unless stated otherwise. Cite this article:
Berlin, Connecticut Facts for Kids. Kiddle Encyclopedia.