The Hanging Hills of south central Connecticut, United States are a range of mountainous trap rock ridges overlooking the city of Meriden and the Quinnipiac River Valley 900 feet (274 m) below. They are a sub-range of the narrow, linear Metacomet Ridge that extends from Long Island Sound near New Haven, Connecticut, north through the Connecticut River Valley of Massachusetts to the Vermont border. A popular outdoor recreation resource, the range is known for its microclimate ecosystems, rare plant communities, and expansive views from cliffs that rise abruptly over 700 feet (213 m) above the surrounding landscape. The Hanging Hills encompass the 1,800-acre (7.3 km2) Hubbard Park, designed with the help of landscape architect Frederick Law Olmsted. The 51 mile (80k) Metacomet Trail traverses the range.

The Hanging Hills' Hubbard Park was financed by Walter Hubbard, local entrepreneur and president of the Bradley & Hubbard Manufacturing Company. Hubbard elicited the assistance of eminent landscape architect Frederick Law Olmsted in drawing up the design.

The fault-block Hanging Hills were formed 200 million years ago during the Triassic and Jurassic periods and are composed of trap rock, also known as basalt, an extrusive volcanic rock. Basalt is a dark colored rock, but the iron within it weathers to a rusty brown when exposed to the air, lending the ledges a distinct reddish appearance. Basalt frequently breaks into octagonal and pentagonal columns, creating a unique "postpile" appearance. Huge slopes made of fractured basalt scree are visible beneath many of the ledges of the Hanging Hills; they are particularly visible along the base of East Peak where it plunges into Merimere Reservoir. The basalt cliffs are the product of several massive lava flows hundreds of feet deep that welled up in faults created by the rifting apart of North America from Eurasia and Africa. These basalt floods of lava happened over a period of 20 million years. Erosion occurring between the eruptions deposited deep layers of sediment between the lava flows, which eventually lithified into sedimentary rock. The resulting "layer cake" of basalt and sedimentary sheets eventually faulted and tilted upward. Subsequent erosion wore away the weaker sedimentary layers a faster rate than the basalt layers, leaving the abruptly tilted edges of the basalt sheets exposed, creating the distinct linear ridge and dramatic cliff faces visible today. The best way to imagine this is to picture a layer cake tilted slightly up with some of the frosting (the sedimentary layer) removed in between. Subsequent scour by moving glacial ice plucked away the basalt from the steep southern end of the crest of the broken ridge, creating overhanging cliffs. In the Meriden region, numerous northeast-trending normal faults offset the volcanic flows and intervening sedimentary rocks. Several of these faults break the Metacomet Ridge north of Meriden. Stream erosion and glacial ice carved canyons along these faults, dividing the ridge into the finger-like promontories of the Hanging Hills. Merimere Reservoir was built in the fault-controlled valley between East Peak and South Mountain. 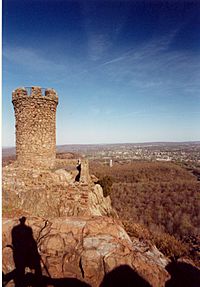 The Hanging Hills are a popular outdoor recreation resource. Hubbard Park features a bandshell and flower gardens and is the site of a variety of local festivals and concerts, most notably the spring Daffodil Festival. A park road leads to Castle Craig Tower and is open from April through October from 10:00 a.m. to 5:00 p.m. A number of trails, most notably the 51 mile (80k) blue-blazed Metacomet Trail (maintained by the Connecticut Forest and Park Association), traverse the range. Trails are open to hiking, backcountry skiing, and snowshoeing; roads are open to bicycling and mountain biking. Swimming is prohibited. Rock climbing, prohibited within Hubbard Park, is enjoyed on Cathole Mountain. From the top of the Hanging Hills' many cliffs it is possible to see much of the Quinnipiac River Valley region, Long Island Sound, and the distant higher peaks of southern New England.

Much of the Hanging Hills have been conserved as parkland, municipal water supply, or conservation easement. Private landowners also hold significant acreage, particularly on the east and north sides of the range. In 2000, the Hanging Hills were included in a study by the National Park Service for the designation of a new National Scenic Trail now tentatively called the New England National Scenic Trail, which would include the Metacomet-Monadnock Trail in Massachusetts and the Mattabesett Trail and Metacomet Trail trails in Connecticut.

A number of regional and local non-profit organizations are active in conserving the landscape and ecosystems of the Hanging Hills, most notably the Connecticut Forest and Park Association, the Meriden Land Trust, and the Berlin Land Trust.

The Black Dog of the Hanging Hills 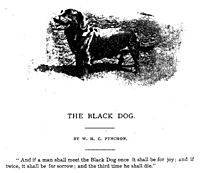 The Black Dog of the Hanging Hills

The Black Dog of the Hanging Hills is an allegedly supernatural hound that appears in local folklore. Folklore holds that it has haunted the region since the early 19th century and that it manifests as a small black dog, often gregarious in nature, which leaves no footprints and makes no sound. According to the legend, to see the Black Dog the first time results in joy while a second sighting is a warning. Seeing the Black Dog a third time is said to be a death omen. At least six deaths have been blamed on third meetings with the Black Dog.

One of the earliest accounts of the dog was published in the Connecticut Quarterly, (April–June, 1898), by New York geologist W.H.C. Pynchon. According to Pynchon, in February 1891 he and geologist Herbert Marshall of the USGS were conducting geologic research in the Hanging Hills when they saw the dog. Pynchon had seen the dog once before. Marshall, who had seen the dog twice, scoffed at the legend. Shortly after the two of them saw the dog, Marshall slipped on the ice atop one of the cliffs and plunged to his death. His body was recovered by authorities. Reports of the Black Dog continue to circulate today.

All content from Kiddle encyclopedia articles (including the article images and facts) can be freely used under Attribution-ShareAlike license, unless stated otherwise. Cite this article:
Hanging Hills Facts for Kids. Kiddle Encyclopedia.