Southington is a town in Hartford County, Connecticut, United States. As of the 2010 United States Census, it had a population of 43,069. Southington contains the villages of Marion, Milldale, and Plantsville.

Southington is situated about 20 miles (32 km) southwest of Hartford, about 80 miles (130 km) northeast of New York City, 105 miles (169 km) southwest of Boston and 77 miles (124 km) west of Providence. It includes the areas of Plantsville, Marion and Milldale, each of which has its own post office and distinct architecture. The town rests in a valley of two mountains on its east and west sides. The town is located along exits 28 through 32 of Interstate 84, exit 4 of Interstate 691, and bisected by Connecticut Route 10. Southington has the nickname of "The Apple Valley", due to the many orchards that still dot its landscape. The Quinnipiac River flows through the town. It is home to Mount Southington ski area, which has drawn visitors since the 1960s.

The Metacomet Ridge, a rugged trap rock mountain ridge that extends from Long Island Sound to the Massachusetts/Vermont border, passes through Southington. Notable peaks along the ridge form the eastern edge of town: Bradley Mountain, Ragged Mountain, Short Mountain, and part of the Hanging Hills. The ridge is traversed by the 51-mile-long (82 km) Metacomet Trail. Soltys Pond is also a well-known body of water to Southington locals. It was surveyed by Alexander Soltys in 1713 and was added to maps within the next year.

Although Southington was formally established as a town in 1779, its roots go back to a much earlier time. Samuel Woodruff, Southington's first white settler, moved from Farmington to the area then known as "Panthorne" that was settled in 1698. The settlement grew, prospered, and came to be known as "South Farmington" and then later, the shortened version, Southington.

The town's most important early visitor was General George Washington, who passed through the town in 1770 on his way to Wethersfield.

The Marion section of Southington is one of the most historic places in the town. It is the site of an encampment by the great French general, Jean-Baptiste Donatien de Vimeur, comte de Rochambeau, and his troops during the American Revolutionary War. In June 1781, the French troops under Rochambeau's command left Farmington and marched 13 miles (21 km) to their eighth camp through Connecticut, near Asa Barnes Tavern in the Marion section of Southington, now the Marion Historic District.

They camped there for four days. Rochambeau and his officers took shelter in the tavern, and the troops set up camp on a hill on the other side of the road. The area of the encampment has since become known as French Hill, and a marker on the east side of Marion Avenue commemorates the French campsite. According to Rev. Timlow's Sketches of Southington (1875), "Landlord Barnes gave a ball at his tavern, at which a large number of the young women of the vicinity were present; and they esteemed it something of an honor to have had a 'cotillion' with the polite foreigner." The celebrations-infused with spirits provided by Landlord Barnes-spanned the four nights they were in Southington. Rochambeau revisited Barnes's Tavern on the return march on October 27, 1782. According to Timlow, coins, buttons and other things were picked up in the vicinity many years after the two encampments. The Asa Barnes Tavern is now a private residence very near the camp site at 1089 Marion Avenue.

Southington originally was a small, rural farming community. In the early 1900s, Southington developed as a manufacturing center, but still maintained a very small population of a few thousand residents. Some of the products invented there include the first cement that was able to harden under water, the first carriage bolt cutting machine, the break-neck rat trap, and a new tinware process.

With the overall decline of industry in New England, and the construction of Interstate 84 in the mid 1960s, Southington developed into a bedroom community of which the town saw explosive growth and a population that has surged to over 42,000 today. 28% of the workers in Southington are still employed in manufacturing, most of them in the production of fabricated metals and aircraft.

In May 1942, during World War II, the town was selected by the War Department to be highlighted in a defense booklet called Southington, CT—Microcosm of America. Photographers roamed the community taking photos of residents at work, at play and in their homes and churches. The final publication was intended to show friends and foes alike in Europe the typical American citizens and families, their traditions and values. Thousands of copies were dropped from military airplanes over Europe during the Nazi German Occupation. Also in 1942 the mural, Romance of Southington, was painted in the town post office by Ann Hunt Spence. Murals were produced from 1934 to 1943 in the United States through the Section of Painting and Sculpture, later called the Section of Fine Arts, of the Treasury Department. The WPA was the largest and most ambitious American New Deal agency, employing individuals to carry out public works projects.

Each year, Southington is home to the Apple Harvest Festival, an effort to bring together local businesses and denizens from the area and surrounding cities. This has been a tradition of the town since 1969, generally spanning six weekdays and two weekends. Its highlights include a town parade, carnival rides and games, musical performances, and a wide selection of unique recipes and foods served by community cornerstones including the Boy Scouts of America, local churches, the Southington Fire Department and Police Department, the Southington Rotary Chapter, and the Southington Jaycees. Southington is home to several farms and apple orchards, including Rogers Orchards, the largest in the state.

Two of Southington's main state roads are ceremonially named for notable residents. Southington's portion of Route 10 is named the Louis G. Tolles Memorial Highway for the late state Grange leader and legislator (1885–1956). The road was dedicated on Aug. 6, 1960, and rededicated with new signs on Oct. 6, 2007. A section of Route 364 (Oakland Road and Berlin Street) was dedicated as the Officer Timothy Foley Memorial Highway on Sept. 11, 2009, in honor of the first (and to date the only) Southington police officer killed in the line of duty. He died six days after being struck by a vehicle on Dec. 30, 1937.

In January 2011, John Weichsel retired as town manager after 44 years. He was hired by the first Town Council when the council/manager form of government was established in town in 1966. His tenure as a town manager in the same community is one of the longest in the United States. Weichsel died in 2013.

There were 16,814 households out of which 31.8% had children under the age of 18 living with them, 58.2% were married couples living together, 9.4% had a female householder with no husband present, and 28.8% were non-families. 24% of all households were made up of individuals and 11.8% had someone living alone who was 65 years of age or older. The average household size was 2.54 and the average family size was 3.01.

As with the decline of industry in the area, many old factories and buildings were left vacant. The latest to close was Ideal Forging, which filed for bankruptcy in 2001. This factory is located in the town center in the central business district. Meridian Development Partners of New York City became interested in the property in late 2003. This project was to create upscale homes, condominiums, store fronts, and parks on the former factory site. The factory parcel is contaminated and must be remediated before construction can begin. As of late, Meridian has accomplished adding zoning text to the town's regulations, rezoning the land, acquiring ownership of the property, applied for permits, and received approval for demolition from the Wetlands Commission. Demolition is currently underway as of October 2014.

Southington has taken the initiative to spur its own revitalization. In 2002, the town completed the downtown renaissance project. This project replaced the sidewalks on Main Street and Center Street with granite curbing and brick pavers. Lifelong resident philanthropist Robert Petroske donated $50,000 to the revitalization effort, which led to the installation of decorative iron lamp posts, benches, and rubbish bins. Flowering trees were planted, and a former fountain and light fixture was restored and relocated from Recreation Park (where it had been moved in 1961) to the town center. A renaissance zone was created where private business owners in the zone could apply to the town to continue the project of granite, brick pavers, and lamp posts, of which the town would pay the difference of replacement concrete sidewalks versus the more expensive brick. The extension of brick pavers from Center Street to a section on the east side of Liberty Street was completed in July 2008 to connect with the pavers installed outside the new Liberty Square office building.

The town water department, which built a new facility on West Queen Street in 2002, demolished its former facility located between Mill and High streets in June 2008 and developed the land into a landscaped park, along with a continuation of the sidewalks, iron fences and decorative lamp posts. The old water facility abuts the linear walking trail.

The linear trail opened to the public in the summer of 2003. This trail was built over the town's old rail line which had ceased operation several years earlier. Dubbed the Farmington Canal Greenway, when completed it will stretch from New Haven, Connecticut, to Northampton, Massachusetts, following the route of the historical Farmington Canal. The second phase of construction on the trail, which officially opened in 2011, redeveloped the old train line from Plantsville center to the Cheshire town line. The project has brought landscaping, iron benches, and intersections of brick pavers where the trail crosses roads. This is seen as a major link for the further revitalization of downtown Southington and Plantsville. Eventually the trail will connect with the Cheshire-to-New Haven route.

On March 28, 2015, CTfastrak, Connecticut's first bus rapid transit corridor, opened. It provides a separated right-of-way between Hartford and New Britain; Express bus services travel between downtown Hartford and Waterbury, with service to Southington, with its free park-and-ride located at the corner of South Main and Mulberry streets. Following its creation, public transportation can now connect Southington residents to Waterbury station and the Metro-North Railroad, providing service to Bridgeport and ultimately Stamford and New York City.

Southington is home to several highways, including Interstate 84, also known as The Yankee Expressway, and Interstate 691.

Southington boasts a fair share of large parks and open land, each serving several outdoor activities, and as a whole, a vast array of them. 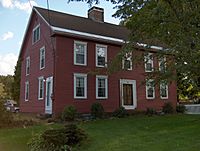 There are numerous houses and districts in Southington that are listed on the National Register of Historic Places, including:

All content from Kiddle encyclopedia articles (including the article images and facts) can be freely used under Attribution-ShareAlike license, unless stated otherwise. Cite this article:
Southington, Connecticut Facts for Kids. Kiddle Encyclopedia.