Kids Encyclopedia Facts
Not to be confused with Plainfield, Connecticut.

Plainville is a town in Hartford County, Connecticut, United States. The population was 17,716 at the 2010 census.

Plainville holds an annual Hot Air Balloon Festival at the end of August at Norton Park, gathering many of the townspeople together for fun-filled nights of games, music, and fireworks. The event is sponsored by the Plainville Fire Company. However, wanting to improve the soccer fields with an irrigation system at Norton Park, the Plainville Town Council was planning to discontinue the Balloon Festival due to the fire trucks usually parking on the soccer fields. However this did not pass, and the festival continues to operate annually.

Plainville has also been something of a minor transportation hub. In the nineteenth century, Plainville was served by the Farmington Canal. It also sits on the intersection of two rail lines, one running north from New Haven and the other running east-west between Waterbury and Berlin. Finally, Plainville is the home of Robertson Airport, the oldest private airport in Connecticut. 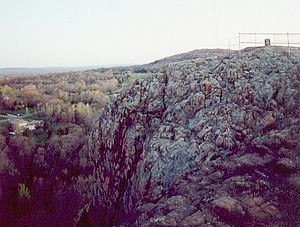 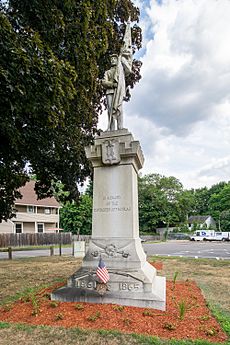 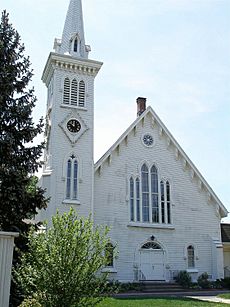 The Town of Plainville is one of the only municipalities to own its own airport, Robertson Field.

There is one middle school, the Middle School of Plainville, which serves grades 6 to 8. The middle school adopts the same mascot and colors as the town high school.

Plainville High School is the only town high school. The school mascot is the Blue Devil, and the colors are blue and white, same as nearby Central Connecticut State University. The baseball team has a rich tradition, with another state title won in 2012.

All content from Kiddle encyclopedia articles (including the article images and facts) can be freely used under Attribution-ShareAlike license, unless stated otherwise. Cite this article:
Plainville, Connecticut Facts for Kids. Kiddle Encyclopedia.