Kids Encyclopedia Facts
Not to be confused with Plainville, Connecticut.

Plainfield is a town in Windham County, Connecticut, United States. The population was 14,973 at the 2020 census. The town comprises four villages: Plainfield (south, ZIP code 06374), Moosup (northeast, 06354), Wauregan (northwest, 06387), and Central Village (west, 06332). Each village has their own respective United States Post Office and fire department. The entire town is serviced by the 860 area code.

Plainfield was incorporated in 1699 as the town of Quinebaug and renamed the following year to its current name. Plainfield proved to be an industrial heavyweight in the 19th and early 20th centuries due largely to the ability of the Moosup and Quinebaug Rivers to provide power to the different mills throughout town. Combined with the mills, Plainfield had incredible commerce for a small town because four railways from Hartford, New York, Boston, and Providence intersected within the town. There was also a highly acclaimed school on Academy Hill, which is how the present Academy Hill Road got its name.

Sites in Plainfield that are listed on the National Register of Historic Places are:

According to the United States Census Bureau, the town has a total area of 43.0 square miles (111.5 km²), of which, 42.3 square miles (109.5 km²) of it is land and 0.8 square miles (2.0 km²) of it (1.81%) is water. From the southernmost point, Plainfield is 20 miles inland of the Long Island Sound and Block Island Sound (Atlantic Ocean). Plainfield is the southernmost town of Windham County. The Quinebaug River generally forms the western border of the town. The Moosup River feeds the Quinebaug and runs across the northern portion of town.

Plainfield is bisected by the Connecticut Turnpike (I-395 and CT 695) and is serviced by three exits: Lathrop Road at exit 28, CT 14A at exit 29, and CT 14 at exit 32. All exits are off the I-395 portion of the Turnpike, which runs north and south. Exit 35 off I-395 North is in Plainfield, but does not offer access to any Plainfield streets. CT 12 generally runs parallel to the west of the Turnpike, and is less than one-half mile from all three Turnpike exits.

There is no direct air, passenger rail, or navigable water access to Plainfield, although the town is serviced by the Providence and Worcester Railroad (freight only), which also parallels the Connecticut Turnpike corridor. There is no public transport system available in the town; combined with a lack of a sidewalk and/or segregated cycle facilities network and the large area of the town, this necessitates that most transit is done by car. 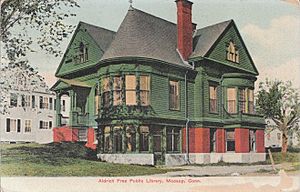 The Plainfield Board of Education (also Plainfield Public Schools) is responsible for the operation of schools, and operates seven facilities throughout the town.

All content from Kiddle encyclopedia articles (including the article images and facts) can be freely used under Attribution-ShareAlike license, unless stated otherwise. Cite this article:
Plainfield, Connecticut Facts for Kids. Kiddle Encyclopedia.