Portland is a town in Middlesex County, Connecticut, United States. The population was 9,384 at the 2020 census. The town center is listed as a census-designated place (CDP). It is situated across the Connecticut River from Middletown.

Brownstone quarried in Portland was used in the construction of Hartford's Old State House in 1796. The vast majority of the brownstone buildings in Connecticut (see College Row at Wesleyan University and the Long Walk at Trinity College) as well as the famous brownstones in New York City were built with brownstone from Portland's quarries. Today, one of the quarries has been transformed into an adventure park in the summer months featuring zip lines, cliff diving and scuba locations.

About half of the town's perimeter is made up of the Connecticut River. The town has eight marinas and boat clubs as well as three 18-hole golf courses.

The Wangunk tribe lived in the area prior to European settlement, and lived in Portland continuously throughout the settler period. Wangunk descendants still live in the area today. Their name referred to the bend in the Connecticut River which curves around half of the town's perimeter.

Settlement to the nineteenth century

The first European settlers came to Portland in the 1690s. They were attracted by brownstone, which was used both for construction and for gravestones. Proximity to the river meant that the stone could be transported far and wide, and the Portland brownstone quarries supplied to New York, Boston and even San Francisco, Canada and England. By the 1850s, more than 1,500 people were employed in the quarry industry. More than 25 ships transported the stone. By the 1850s, shipbuilding became more important as an industry, and the economic center of town shifted toward the Gildersleeve area. Immigrants from Ireland, then Sweden, then (to a lesser extent) Italy came to town to work the quarries.

It originally was part of Middletown and then known as East Middletown. In 1767, Chatham, which then included Portland and East Hampton, was founded.

The town was a part of Chatham until 1841, when it became separate. Its name comes from Portland, England, a place famous for its freestone quarries.

Portland's oldest church is the First Congregational Church. In 1710 a meeting was held for the building of a meetinghouse for preaching. The Connecticut General Assembly approved "parish privileges" in 1714. After a vociferous controversy, a location for the new "Third Ecclesiastical Society of Middletown" meetinghouse was decided upon at "Hall Hill". On October 25, 1721, Rev. Daniel Newell, the first pastor, was ordained. The Bristol, Connecticut native and Yale College graduate died in 1731. In 1748 a new meetinghouse was built, and in 1843 the name of the society was changed to the "First Ecclesiastical Society of Portland." 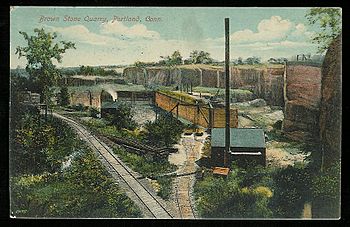 Before quarrying became the town's chief industry in the nineteenth century, Portland was known for its shipbuilding. The Gildersleeve village in town is associated with the Gildersleeve family, prominent shipbuilders in the 1800s. The first vessel built in town was launched in 1741. During the American Revolution and the War of 1812 many U.S. Navy vessels were built in various shipyards in town. Tinware and enamelware were produced in town in the late nineteenth century. Tobacco farming has also been a big industry in the town. During the American Civil War a number of vessels were also constructed in Portland, such as the steamship USS Guard (1857) and the bark USS J. C. Kuhn (1859).

In 1895, the town decided to establish a public library, although private libraries had been in town for more than a century. The Portland Library was originally a room in Town Hall with about 800 books after the private Portland Library Association turned over all of its books. Within months of its establishment, Horace B. Buck, a native resident who later moved to Worcester, Massachusetts, donated $2,000 toward the erection of a separate library building, and the town appropriated another $1,000. Shaler & Hall and Brainerd Quarries contributed the brownstone, and before the building was finished, Buck gave another $500 (after his death, his estate gave another $2,500). The library moved into another building in 1981.

In the early twentieth century, brownstone couldn't compete much with concrete, and the industry went into decline. In 1936, the Connecticut River flooded the quarries effectively ending the industry in town. Shipbuilding also collapsed at this time. 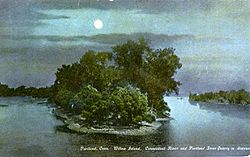 In the early eighteenth and nineteenth centuries, schools were managed by school societies. These societies were abolished when the first Board of Education was elected in 1856. The area was divided into school districts.

Gildersleeve Hall, District 1, was built in 1876 and located on Main Street. It offered both elementary and high school. It was the first high school conducted in any town in Connecticut. When fire destroyed it in 1889, it was rebuilt on the same site. It continued to offer high school until 1899. It served students until 1958. It was demolished to make room for the third school on the site. Gildersleeve School opened in 1964 and still stands at 575 ½ Main Street. It now serves grades 3 and 4.

Central School, 1907. Originally the High School, it now houses the Town Hall and Board of Education.

District 3 was located on Rose Hill Road opposite the residence of Walter W Olsen. The Rose Hill School was the first school building in Portland and used until 1936. District 4, Penfield Hill School, 1830–1920, is now owned by Noyes School. District 5, Up City School, 1857–1921, on Glastonbury Road is now a residence. District 6, Pecausett School, 1830–1911, was located at the southwest corner of Grove Street and East Hampton Road. District 7, the Bucktown School, 1830–1872, was built on the eastern end of Cotton Hill Road.

The school currently known as the Brownstone Intermediate School, located at 314 Main Street, was opened in 1932 as the Junior-Senior High School. It was open to grades 7-12. Renovations were made to the school in 1953 and 1967. In 1960, it was renamed Portland Junior High School and then renamed again in 1989 to Portland Middle School where it housed grades 6 through 8. In 2004, it was renamed Brownstone Intermediate School and now houses grades 5 and 6.

All content from Kiddle encyclopedia articles (including the article images and facts) can be freely used under Attribution-ShareAlike license, unless stated otherwise. Cite this article:
Portland, Connecticut Facts for Kids. Kiddle Encyclopedia.