Kids Encyclopedia Facts
Not to be confused with East Hampton, Connecticut.

Hampton is a town in Windham County, Connecticut, United States. The population was 1,728 at the 2020 census.

Hampton is made up of lands originally shared by the towns of Pomfret and Windham. It was incorporated from the towns of Pomfret, Brooklyn, Canterbury, Mansfield, and Windham in 1786. The Congregational Church is the second oldest church in the state still in use, with portions of the structure dating from 1754. Also preserved is "The House the Women Built," a 2-story building built in 1776 by Sally Bowers and other young women of the town while the men fought in the Continental Army. At Clark's Corner there is also a liberty pole dating from 1849. Erected by a resident named Jonathan Clark, it records the distance to Hartford and other towns. 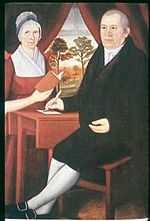 A painting (ca. 1795-1800) by John Brewster Jr. of his stepmother and his father, a leader in the Hampton church and member of the Connecticut General Assembly

All content from Kiddle encyclopedia articles (including the article images and facts) can be freely used under Attribution-ShareAlike license, unless stated otherwise. Cite this article:
Hampton, Connecticut Facts for Kids. Kiddle Encyclopedia.