The first people emigrated from England in 1637, and came to the New London and Waterford area (at the time, this land was called West Farms). One of the first people who set sail for this area was John Winthrop, Jr. Waterford got its name for its proximity to being in between two rivers. The residents of Waterford resided in wigwams until they dug up plots for 38 houses near the Great Neck area. John Winthrop was given several hundred acres of land, including Millstone Point and Alewife Cove. Various dams, mills, and ponds were constructed in these area. The only expansion of people in the Waterford-New London area were the growth of families and children. Later on, more people immigrated to Waterford, including the Welsh, Italian, Russian, Irish, and Scottish.

Waterford finally disbanded from New London on October 8, 1801. This happened after several farmers decided to hold a petition to separate them. The first town meeting was held in November, 1801 to appoint town officials; tax collectors, town surveyors, Fence Viewers, and First Selectman. Only the first selectman got paid at the time.

Waterford in the 19th century was a huge agricultural town, having mostly sheep farms. Waterford was also widely known for its granite industry that lasted from the late 19th century to the 1930s. Graniteville, a district in Waterford, is named after this industry. Although not part of Graniteville, the area today known as Crystal Mall was also home to granite quarries. Waterford's granite was used in many construction projects such as roads, the foundation for Fort Sumter, and the Statue of Liberty. Granite though was replaced by concrete which slowly shrunk the granite industry until the 1930s.

During the 20th century, sheep farms were replaced by dairy farms. Between 1920 and 1960, there were about 100 dairy farms in Waterford. In addition, there were 10 to 100 heads of cattle. Waterford also obtained its town seal in 1946. It was made by Martin Branner who was a cartoonist who also made the famous comic, Winnie Winkle. After World War II, Waterford boomed with development. Many new roads and building were made. Also, Waterford's population increased by 10,000 between 1946 and the present time. In 1957, the first stop light was added in Waterford. In addition, the first retail center was built in 1978.

At the 2010 census, there were 2,887 people in 1,327 households, including 732 families, in the Waterford census-designated place, comprising the town center. 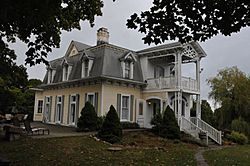 The Seaside Sanitorium, built in 1934.

Pleasure Beach is one of the many beaches in Waterford, Connecticut. It is located at the end of Dock Road. Not only does Pleasure Beach have a beach, it is also the location of a public boat launch. Pleasure Beach is part private and part public. The membership cost for a family of four is $825.00, which includes the new member fee of $500.00; this is for the first 3 installments – total cost is $1,500.00; the assessment fee of $250.00; this includes 2 free badges per household, the extra badges fee of $50.00, and a $25.00 cost for each additional badge; children of eight and over are required to wear a badge, and the voting member fee, which is $25.00 for one person to vote. To become a member you have to live in certain boundaries. The private side membership includes attendance to all beach get-togethers and activities. Some activities in the past are cocktail parties, beach cleanup at the start of the season, sand castle contests, and an annual beach picnic. The public side is marked and is open to the public with a path down to the beach and a parking lot a short walk down.

Waterford's economic center is predominantly retail chains, including a variety of mini-malls and the Crystal Mall. There are several family-owned delicatessens and restaurants. Waterford is also home to JayPro Sports, which manufactures sports equipment for baseball, basketball, and tennis, and to Dominion's Millstone Nuclear Power Plant. The plant consists of three reactors, the first built between 1966 and 1970. While Millstone's first reactor is no longer in operation, the remaining two still provide power to a variety of towns in New England.

Elementary schools appeared in 1915 when Quaker Hill School was built. Earlier, a lot was set aside for Quaker Hill in 1725 while the town was split into three districts: "Neck and Nehantick quarters," "West," and the "North East." Each district would end up getting split into even more individual districts. Later on, a second schoolhouse was replaced, built in 1858. Cohanzie School was built in 1923. It replaced four schools: Gilead School, "Peter Baker" located on far northern Vauxhall Street, Lakes Pond brick building, and Cohanzie predecessor. Cohanzie was later closed in 2009 by the Town of Waterford. There has been discussions of renovating the remains of the building into a senior home.

All content from Kiddle encyclopedia articles (including the article images and facts) can be freely used under Attribution-ShareAlike license, unless stated otherwise. Cite this article:
Waterford, Connecticut Facts for Kids. Kiddle Encyclopedia.