Crystal Mall is an enclosed, two-level regional mall in Waterford, Connecticut. It is situated in a central retail area off the Hartford Turnpike (Route 85), across from a smaller, open-air shopping center, Waterford Commons. The mall covers a gross leaseable area of 782,786 sq ft (72,723.2 m2), making it Connecticut's ninth largest mall, boasting 110 shops. Its primary trade area includes a trade population of 296,161 people, mostly serving the nearby towns of Waterford, Stonington, Norwich, Groton and New London. The anchor stores are JCPenney, Christmas Tree Shops, Bed Bath & Beyond, and Macy's (closing April 2021). There is 1 vacant anchor store that was once Sears. 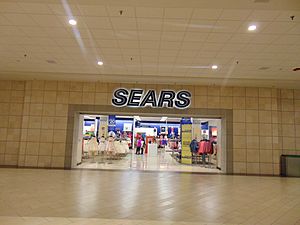 The former Sears anchor store at the mall. The store closed as 2018 came to a close as part of a plan to close 142 Kmart and Sears locations.

The mall was developed in 1984 by New England Development. When it opened, it was the only regional mall in the area, and many smaller shopping centers faced strong competition. Some, like nearby New London Mall, were eventually forced to change strategies, such as becoming a "lifestyle center". The original anchors were Sears, JCPenney, Filene's, and Jordan Marsh. Jordan Marsh became Macy's in 1996.

After about 10 years in operation, Crystal Mall's look was becoming outdated, and management realized it needed to be renewed. In 1997, the mall underwent a renovation to upgrade its interior design. The previous dark color scheme was replaced by a brighter white, the food court was remodeled, and lighting as well as other fixtures were improved. The elegant center chandelier was slated to be removed during the renovations, but the fixture was popular with shoppers, so it was shined and has remained. The mall has still been criticized for its aging exterior look, and for not updating its tenants to keep up with the times.

In 2006, one of the mall's longstanding anchors Filene's closed its store, as this was one of a number of New England Malls that had both a Macy's and Filene's. After the May Co Department Store Company was purchased by Federated Department Stores (now renamed Macy's, Inc.) duplicate stores were closed at many New England malls. The anchor space remained empty for over a year. In late 2007, it was announced that two non-traditional anchors would fill the vacant space: Christmas Tree Shops and Bed Bath & Beyond. Both retailers opened a few months later in early 2008, with Christmas Tree Shops on the first level, and Bed Bath & Beyond on the second level.

In 2015, Sears Holdings spun off 235 of its properties, including the Sears at Crystal Mall, into Seritage Growth Properties.

On October 15, 2018, it was announced that Sears would be closing as part of a plan to close 142 stores nationwide. The store closed in January 2019.

On January 6, 2021, it was announced that Macy's would be closing in April 2021 as part of a plan to close 46 stores nationwide. After Macy's closes, JCPenney will be the only traditional anchor store left.

All content from Kiddle encyclopedia articles (including the article images and facts) can be freely used under Attribution-ShareAlike license, unless stated otherwise. Cite this article:
Crystal Mall (Connecticut) Facts for Kids. Kiddle Encyclopedia.