A majority of the borough land mass is safely above sea level. However, it does have a few low elevation areas which are subject to flooding during very heavy storm situations(Hurricanes). The most recent, circa 2013 FEMA generated flood map is shown at the right, with the borough border roughly outlined in WHITE. 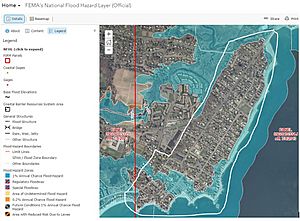 There were 762 households, out of which 23.8% had children under the age of 18 living with them, 45.1% were married couples living together, 10.1% had a female householder with no husband present, and 41.3% were non-families. 34.4% of all households were made up of individuals, and 9.3% had someone living alone who was 65 years of age or older. The average household size was 2.25 and the average family size was 2.91.

All content from Kiddle encyclopedia articles (including the article images and facts) can be freely used under Attribution-ShareAlike license, unless stated otherwise. Cite this article:
Woodmont, Connecticut Facts for Kids. Kiddle Encyclopedia.