Old Lyme is a coastal town in New London County, Connecticut, United States. The town has several beach areas that offer summer rentals of cottages by the week or the month. The Main Street of the town, Lyme Street, is a historic district with several homes once owned by sea captains. The town has an art school and a thriving art community. The town is named after Lyme Regis, England.

The town of Old Lyme contains several villages, including Black Hall, Laysville, Soundview, and South Lyme. The total population of the town was 7,628 at the 2020 census.

Old Lyme is a community of about 7,600 permanent residents, in addition to several thousand seasonal vacationers who occupy a seaside community of summer residences. It is located on the east bank of the Connecticut River at its confluence with the Long Island Sound, across the river from Old Saybrook on the west bank. Numerous examples of Colonial and Federal architecture can be found throughout the town.

The town of Lyme was set off from Saybrook (now known as Deep River), which is on the west bank of the river mouth, on February 13, 1665. South Lyme was later incorporated from Lyme in 1855, then renamed Old Lyme in 1857 because it contains the oldest-settled portion of the "Lymes". Old Lyme occupies about 27 square miles (70 km2) of shoreline, tidal marsh, inland wetlands and forested hills. Its neighbor to the north is the town of Lyme, and to the east is East Lyme. Other placenames from the same root are Hadlyme (between Lyme and East Haddam) and South Lyme (a beach resort area of Old Lyme). The placename "Lyme" derives from Lyme Regis, a small port on the coast of Dorset, England, from which it is believed the early settlers migrated in the 17th century. The picturesque Old Lyme Cemetery contains the graves of the original settlers. The Duck River flows through the cemetery and into the Connecticut River at Watch Rock Park.

The "Lyme" in Lyme disease was named after the town. It was discovered in 1975 after a mysterious outbreak of what appeared to be juvenile rheumatoid arthritis in children who lived in Lyme and Old Lyme.

The Florence Griswold House in Old Lyme housed an art colony for many years in the early 20th century to many prominent American Impressionist painters. The Lyme Art Colony included Childe Hassam, Edward Charles Volkert, Willard Metcalf, Wilson Irvine, and Henry Ward Ranger, among many others. These artists made Old Lyme a thriving art community, which still continues today.

The Griswold House was transformed into an art museum, the Florence Griswold Museum, or affectionately called "Flo Gris", by residents of Old Lyme. Many American Impressionist paintings of the era are of subjects in and around the Griswold House and are featured in the museum, along with many other works and personal possessions of the artists who frequented there. The building of the Old Lyme Congregational Church is known for the many paintings that have been made of it, most notably by Childe Hassam. 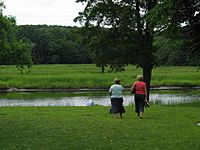 Rogers Lake is located in the towns of Old Lyme and Lyme and is formed by a dam along Town Woods Road in Old Lyme. The lake's surface area is 265 acres (1.07 km2). Grassy Hill Brook and Broad Swamp Brook feed into the lake. The lake's watershed is 4,833 acres (19.56 km2) of woodland. The outlet below the dam is Mill Brook, which is a tributary of the Lieutenant River, a tributary of the Connecticut River.

There are five small islands on Rogers Lake, the largest of which has a small cottage built on it.

Rogers Lake is stocked every year with brook and rainbow trout. 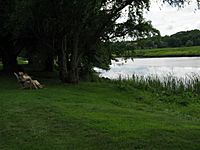 Relaxing behind the Florence Griswold Museum in Old Lyme 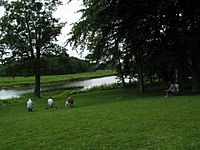 First Selectman and Board of Selectmen

The Estuary Transit District provides public transportation throughout Old Lyme and the surrounding towns through its 9 Town Transit Service. Services include connections to the Old Saybrook Train Station, served by Amtrak and Shore Line East railroads, as well as the New London Transportation Center, served by train and ferry service.

All content from Kiddle encyclopedia articles (including the article images and facts) can be freely used under Attribution-ShareAlike license, unless stated otherwise. Cite this article:
Old Lyme, Connecticut Facts for Kids. Kiddle Encyclopedia.