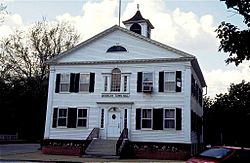 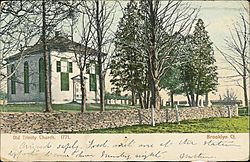 Settled in the late 17th century and incorporated as its own town in 1786, Brooklyn is now one of the fastest growing towns in Windham County. It is named for the Quinebaug River, or Brook Line, which forms its eastern boundary. Originally land of the Wabaquasset, Brooklyn incorporated as a town separate from Canterbury and Pomfret in May 1786.It is home to the Brooklyn Fair, America's oldest continuously operating agricultural fair, as well as the Brooklyn Correctional Institution, a state-run medium security prison.

Brooklyn held the 1833 trial of Prudence Crandall, a schoolteacher charged with the crime of educating black students.

Brooklyn is the final resting place of Revolutionary War General Israel Putnam. Though he was originally buried in an above ground tomb in Brooklyn's South Cemetery, his remains had to be moved due to excessive visitors. In 1888, a statue of Putnam mounted on a horse was erected, and his sarcophagus placed in the foundation. The statue stands slightly south of the town green, in front of the post office. Brooklyn is also home of the Middle School Bobcats and Elementary School Bears.

The climate in this area has mild differences between highs and lows, and there is adequate rainfall year round. According to the Köppen Climate Classification system, Brooklyn has a marine west coast climate, abbreviated "Cfb" on climate maps.

All content from Kiddle encyclopedia articles (including the article images and facts) can be freely used under Attribution-ShareAlike license, unless stated otherwise. Cite this article:
Brooklyn, Connecticut Facts for Kids. Kiddle Encyclopedia.