Montville is a town in New London County, Connecticut in the United States. The population was 19,571 at the 2010 census.

The villages of Chesterfield, Mohegan, Oakdale, and Uncasville are located within the town; the latter two have their own ZIP Codes. Town residents often identify with these villages more than the Town of Montville as a whole. The Mohegan Sun casino resort is located in the village of Uncasville.

In the 17th century, when English settlers arrived, southeastern Connecticut was the scene of rivalry between the Pequot people, the dominant Native American group in the New London area, and the newly independent Mohegan. The latter became friendly to the English. For defense against the Pequot, the Mohegan sachem Uncas had established a fortified village on a promontory above the Thames River within what is now the town of Montville. The Mohegan village, now known as Fort Shantok, was protected on the inland side by palisades first built in about 1636 at the time of the Pequot War, rebuilt during wars with the Narragansett people circa 1653–1657, and rebuilt again at the time of King Philip's War (1675–1676).

When the boundaries of New London (then called "Pequot") were first defined in 1646, the Oxoboxo River formed the northern boundary. Parts of the modern town of Montville lying south of the river were included in New London, while the area north of the river was treated as Mohegan land. Over time the settlers assumed control of Mohegan lands. In 1703 the area between the Oxoboxo River and Norwich (now part of the town of Montville) was annexed by New London.

In 1786 Montville was separated from New London and incorporated as a separate Town. Before incorporation, it was known as the North Parish of New London. In 1819 the adjacent Town of Salem was formed from parts of the towns of Montville, Lyme, and Colchester.

Four properties in town are listed on the National Register of Historic Places:

Town residents often identify with these villages more than the Town of Montville as a whole. The center of Oakdale is small, consisting of only a few private residences and the post office. The Mohegan Sun casino resort is often referred to as being in Uncasville, although the village is three miles to the south. The Mohegan refer to Uncasville as it is named for a prominent sachem of theirs from the 17th century.

There were 6,426 households, out of which 34.7% had children under the age of 18 living with them, 58.6% were married couples living together, 9.9% had a female householder with no husband present, and 27.2% were non-families. 21.3% of all households were made up of individuals, and 7.4% had someone living alone who was 65 years of age or older. The average household size was 2.63 and the average family size was 3.05.

Part of Montville is also treated by the U.S. Census Bureau as a census-designated place called Oxoboxo River.

The Mohegan Native American Tribal Nation has been a presence in this area of Connecticut since the 16th century, and descended from indigenous cultures in the area for thousands of years. In the seventeenth century, the colony of Connecticut granted them a 700-acre (2.8 km2) reservation, located north of the present-day village of Uncasville. Although the reservation is within the borders of the town of Montville, the tribe is federally recognized as a sovereign nation not subject to local or state laws. In addition to operating the Mohegan Sun, a casino resort that opened in 1996, the tribal nation also provides educational programs about their nation's heritage and history.

Since at least the 1990s, people of Chinese descent have moved into the area drawn either by the work available at Mohegan Sun and/or the rising prices in the Northeast's Chinatowns. Their residence, the subject of an exhibition that travelled from the Lyman Allyn Museum in New London to New York City's Museum of Chinese in America, has sparked at least one racist incident.

Located in Uncasville, Mohegan Sun is one of the largest casinos in the world. The Mohegan Tribe of Connecticut created the casino in 1996. With over 250,000 square feet (23,000 m2), the Mohegan Sun complex features a luxury hotel, entertainment theater, and more than 20 restaurants and stores. Mohegan Sun is one of Montville's primary economic locations. It has provided a significant increase in job opportunities and attracted a population influx.

Mohegan Sun is also home to the Mohegan Sun Arena, the site of concerts and live sporting events for Uncasville. It is the home of the WNBA Connecticut Sun.

NRG Energy Inc., based in La Jolla, California, operates an oil and natural gas-powered electricity generating plant in Montville, labeled by environmentalists as one of the "Sooty Six", the dirtiest power plants in the state. The plant was required to install pollution controls to comply with the state's 2002 power plant pollution law. In June 2006 the company proposed building a new type of coal-powered plant on the site for $1.6 billion.

In return for building the plant, the company demanded that the state guarantee NRG long-term contracts for buying the electricity it generates and pick NRG's proposal over other plans for building new power plants in the state. At the time of NRG's proposal, only 18 plants in the world and two in North America used the Integrated Gasification Combined-Cycle technology which the company suggested. Contracts were to be awarded by the DPUC in early 2007. The company said the new plant could open in 2012. NRG Energy announced plans on August 5, 2013 to add fuel cells, solar and biomass conversion to the plant 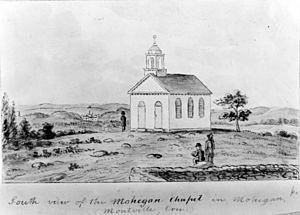 South View of Mohegan Chapel, Monhegan in Montville, a sketch by John Warner Barber for his Historical Collections of Connecticut (1836). According to the Connecticut Historical Society, the chapel was constructed in 1831 with funds from "benevolent ladies in Norwich, Hartford and New London" as a church for Mohegan and white residents of the reservation in Montville. 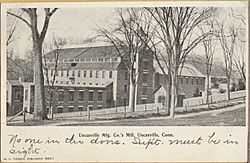 All content from Kiddle encyclopedia articles (including the article images and facts) can be freely used under Attribution-ShareAlike license, unless stated otherwise. Cite this article:
Montville, Connecticut Facts for Kids. Kiddle Encyclopedia.