East Haddam is a town in Middlesex County, Connecticut, United States. The population was 9,126 at the 2010 census.

Until 1650, the area of East Haddam was inhabited by at least three tribes of Indians: the Wangunks, the Mohegans and the Nehantics. The Indians called the area “Machimoodus,” the place of noises, because of numerous earthquakes that were recorded between 1638 and 1899. Loud rumblings, the “Moodus Noises,” could be heard for miles surrounding the epicenter of the quakes near Mt. Tom. The land, which is now Haddam and East Haddam, was purchased by settlers from the Indians in 1662 for thirty coats – worth about $100.

Layout of the highways began in 1669 with Creek Row about ¼ mile east of the River and Town Street “The Great Highway” about ¼ mile east of Creek Row. The first permanent settlers established homesteads along Creek Row in 1685. By 1700, there were thirty families living in East Haddam. Agricultural and timber farming, shipbuilding, tanneries and blacksmiths were among the early commerce. Captain John Chapman began ferry service across the Connecticut River in 1695, which ended with the completion of the swing bridge in 1913.

East Haddam was incorporated as a separate town from Haddam in 1734. By 1756, there were nearly 2,000 residents, with the Millington District as the most populated. Growth of commerce brought a surge in population to around 3,000 people by the mid-1800s. In the nineteenth century, Moodus was the “Twine Capital of America,” with twelve mills in operation. Visitors and residents such as actor, William Gillette, whose castle home was completed in 1914, were drawn to the area known for its rural charm and natural scenery. The growth of the resort areas of Lake Hayward, Bashan Lake and Moodus Reservoir began in the early 1900s and was a booming business for the next fifty years.

There were 3,174 households, out of which 35.2% had children under the age of 18 living with them, 62.3% were married couples living together, 6.9% had a female householder with no husband present, and 28.0% were non-families. 21.4% of all households were made up of individuals, and 8.1% had someone living alone who was 65 years of age or older. The average household size was 2.58 and the average family size was 3.02. 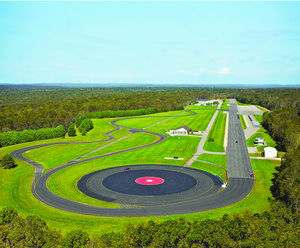 East Haddam has been used as a filming location for many different films and TV shows including:

Lake Hayward is a small private lake community within East Haddam that is home to around 120 families, most living at the lake only during summer months. The community hosts several events for residence. Events include game nights, bingo, child activities, and live music. 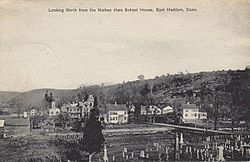 The East Haddam Public School System has about 1,100 students in grades PreK–12; about 121 certified teachers, 70 support staff and 7 administrators. Mr. Brian Reas is superintendent of schools. Located in Moodus, Connecticut, the three schools in the public school system are:

In 2020, The Nathan Hale-Ray High School and Bacon Academy collaborated and made their 18 to 21 transition programs separate from their schools in Colchester, Connecticut in a small single-story building located on Lebanon Avenue.

All content from Kiddle encyclopedia articles (including the article images and facts) can be freely used under Attribution-ShareAlike license, unless stated otherwise. Cite this article:
East Haddam, Connecticut Facts for Kids. Kiddle Encyclopedia.