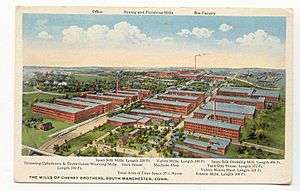 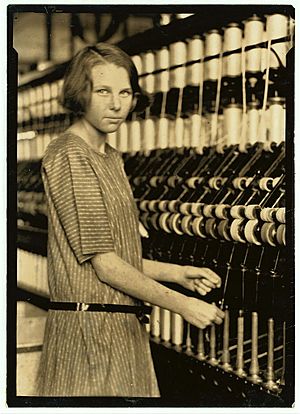 Manchester was settled by colonists around 1672 as a farming community, although at the time it was known just as Orford Parish (the name that can be found on the memorial to the Revolutionary soldiers from the town). The many rivers and brooks provided power for paper, lumber and textile industries, and the town quickly evolved into an industrial center. The town of Hartford once included the land now occupied by the towns of Manchester, East Hartford, and West Hartford. In 1783, East Hartford became a separate town, which included Manchester in its city limits until 1823.

In 1838, the Cheney family started what became the world's largest silk mill. Eventually, Manchester became an ideal industrial community. The mills, houses of the owners, and homes of the workers are now part of the Cheney Brothers Historic District, a National Historic Landmark.

Also of note are the E.E. Hilliard Company Woolen Mills. Founded ca. 1780 by Aaron Buckland and later sold to the Hilliard family, The Hilliard Mills are the oldest woolen mill site in the country.

The city hosts four museums. The Fire Museum is housed in a restored 1901 firehouse building. The museum's firefighting equipment and memorabilia include leather fire buckets used in colonial times, a display showing the evolution of sprinkler systems, a horse-drawn hose wagon, a 1921 Ahrens-Fox fire pumper, and a 105-foot (32 m) 1911 water tower.

The Cheney Homestead Museum is an eighteenth-century house of the founders of the Cheney Brothers Silk Company. On exhibit are examples of period furniture and artwork. Also on site is the one-room Keeney Schoolhouse dating from 1751.

Wickham Park, a non-profit private foundation, is located on Manchester and East Hartford property. The 53-acre (210,000 m2) Oak Grove Nature Center has wildlife habitats. Case Mountain Recreational Area, located in the less populated southeast corner of Manchester, is popular for hiking, mountain biking, and has a great view of the Hartford skyline to the west.

Manchester is famous for its popular Manchester Road Race which is held every Thanksgiving Day. The race has over 10,000 participants yearly, including runners from around the world, as well as thousands of spectators. For New Englanders, it is second in popularity only to the Boston Marathon. The annual auto show is also gaining more popularity every year.

Top employers in Manchester according to the town's 2019 Comprehensive Annual Financial Report.

As home to the Cheney family silk fortune, Manchester was a center of the American silk industry from the late 19th century to the mid-20th century, and was an integral component of not only the economy but success of the town. Today, the Cheney Brothers Historic District showcases mills refurbished as apartments and includes nearby museums.

Manchester posted a total revenue, as of 2017, of $202,901,000, with total expenditures of $199 million, including $133 million towards education. The median rent between 2013-2017 was $1,181, higher than both the county and state medians. The top employing industries are retail trade, health care and social assistance, manufacturing, and government; and the top employers are the Town of Manchester, the Board of Education, Eastern Connecticut Health Network, Inc., and Allied Printing.

The town is home to The Shoppes at Buckland Hills, as well as Shady Glen, a restaurant recognized by the James Beard Foundation in 2012 as an American classic, and has been featured on Food Network.

Manchester Country Club opened in 1917 and was originally designed by Tom Bendelow and Deveroux Emmet. In 1935, it was redesigned in by A.W. Tillinghast. The golf course features a classical New England design and holds an annual open tournament.

Perhaps the most enduring sports legacy of the town is the Manchester Road Race, a 4.748 mile footrace which is held every Thanksgiving morning. It is the second most popular race in New England, behind the Boston Marathon. The event attracts over 10,000 participants, including Olympians, world record holders, and international athletes, in addition to thousands of spectators. The race was first run in 1927, and benefits muscular dystrophy research as well as over a dozen other charities.

The Manchester Silkworms, named for the town's storied past as a silk producer and the world's largest silk mill, were a collegiate summer baseball team founded in 2000. Several former players continued their career to the major leagues, including former Red Sox catcher and veteran Ryan Lavarnway. The team relocated to Laconia, New Hampshire after the 2009 season.

Manchester has parts of three interstate highways (I-84, I-384, and I-291) and Route 6 and Route 44 together constitute Manchester's principal east/west arterial. Connecticut Route 30 is an east/west arterial in the northern section of town. Connecticut Route 83 is Manchester's principal north/south arterial. Starting as South Main Street at the southern border with Glastonbury, Route 83 becomes Main Street through the center of town.

Bradley International Airport, in Windsor Locks, Connecticut, is twenty minutes north of downtown Hartford. It features over 150 daily departures to over 30 destinations on nine airlines. Other airports serving the Hartford area include:

Manchester has several on and off-road bicycle routes. The two most popular routes are the Charter Oak Greenway and the Hop River State Park Trail. Portions of each of those routes have been designated as parts of the East Coast Greenway.

All content from Kiddle encyclopedia articles (including the article images and facts) can be freely used under Attribution-ShareAlike license, unless stated otherwise. Cite this article:
Manchester, Connecticut Facts for Kids. Kiddle Encyclopedia.