East Hartford is a town in Hartford County, Connecticut, United States. The population was 51,252 at the 2010 census. The town is located on the east bank of the Connecticut River, directly across from Hartford, Connecticut. It is home to aerospace manufacturer Pratt & Whitney. It is also home to Pratt & Whitney Stadium at Rentschler Field, a stadium used mainly for soccer and football with a capacity of 40,000 people.

The town is located on the east bank of the Connecticut River, directly across from Hartford, Connecticut. The town includes the neighborhoods of Burnside and Hockanum. According to the United States Census Bureau, the town has a total area of 18.7 square miles (48.5 km2), of which 18.0 square miles (46.6 km2) is land and 0.73 square miles (1.9 km2), or 3.93%, is water.

When the Connecticut Valley became known to Europeans around 1631, it was inhabited by what were known as the River Tribes — a number of small clans of Native Americans living along the Great River and its tributaries. Of these tribes the Podunks occupied territory now lying in the towns of East Hartford and South Windsor, and numbered, by differing estimates, from sixty to two hundred bowmen. They were governed by two sachems, Waginacut and Arramamet, and were connected in some way with the Native Americans who lived across the Great River, in what is now Windsor. The region north of the Hockanum River was generally called Podunk; that south of the river, Hockanum; but these were no certain designations, and by some all the meadow along the Great River was called Hockanum.

Wickham Park, located in East Hartford and Manchester, features Oriental gardens, fountains, open fields, woodlands, ponds, picnic areas, softball fields, and an aviary. The west side of the park offers a scenic view of East Hartford and the skyline of Hartford across the Connecticut River and is a popular site for weddings. It also has a very popular sledding hill in the winter.

Nearby, Rentschler Field Stadium is home of the University of Connecticut Huskies football team and the Hartford Colonials of the United Football League. The stadium has also been used for concerts by artists including The Rolling Stones. 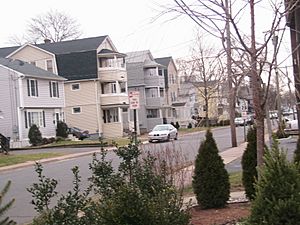 East Hartford is home to a diverse mix of neighborhoods. The northeast and southeast sections of the town are suburban and resemble neighboring towns like South Windsor and Glastonbury. People here tend to be middle class. In contrast, the older, more urban sections of the town are moderate and low income. Some of these neighborhoods include Hockanum in the southwest of the city, Burnside Avenue in the center of the city, Silver Lane also known as "The lane" and Mayberry Village. These neighborhoods are pleasant but also crime filled.

East Hartford is home to the headquarters of Pratt & Whitney, part of the United Technologies conglomerate. The manufacturing plant takes up a significant amount of East Hartford's area, and at its peak, it employed tens of thousands of people; however, currently, it only employs about 7,621. East Hartford also contains a Coca-Cola bottling plant, located on Main Street. The city is dotted with industrial and suburban office parks, and in the early 2000s, urban planners strategically situated a regional stadium, Rentschler Stadium (construction completed September 2003), and a hunting and camping focused department store, Cabela's, on the then vacant former Pratt & Whitney company airfield, Rentschler Field.

All content from Kiddle encyclopedia articles (including the article images and facts) can be freely used under Attribution-ShareAlike license, unless stated otherwise. Cite this article:
East Hartford, Connecticut Facts for Kids. Kiddle Encyclopedia.