Windham is a town in Windham County, Connecticut, United States. It contains the borough of Willimantic as well as the villages of Windham Center, North Windham, and South Windham. Willimantic, an incorporated city since 1893, was consolidated with the town in 1983. The population was 25,268 at the 2010 census.

The town of Windham was incorporated on May 12, 1692. Mohican Sachem Chief Joshua willed the land to sixteen men, most of whom resided in Norwich. The land called Windham consisted of what is now the towns of Windham (which includes Willimantic), Mansfield, Scotland, Chaplin, and Hampton.

The town was named after Wyndham, England. On December 4, 1700, Windham’s first Minister, Reverend Samuel Whiting, was ordained. The church was a Congregational Church, stemming from the Puritans. The first church building was erected shortly after on the Windham Green. Early settlers were farmers who grew crops such as wheat, rye, corn, barley, flax, and hemp, as-well-as raising livestock. Early industry in Windham consisted of sawmills, gristmills, and blacksmith’s shops taking advantage of the water power from streams and rivers. In 1823 Windham, along with Lebanon, Columbia, Chaplin, and Mansfield petitioned the General Assembly to become their own county. Tolland County, the last county formed in Connecticut, had just been formed a few years earlier, taking towns away from Hartford and Windham counties. The town of Windham was no longer the center of Windham County. The courts and other government offices had been moved to Brooklyn which was more centralized and easier to travel to. All transportation was difficult due to the poor quality of the roads. The General Assembly denied the petition. One year later, Lebanon petitioned the General Assembly to be returned to New London County, which they had originally been part of before the creation of Windham County. The General Assembly granted their petition. That same year, Mansfield and Columbia petitioned the General Assembly to join Tolland County. The General Assembly denied both petitions. Mansfield tried again in 1826, and Columbia tried again in 1827. This time the General Assembly granted both towns their petitions.

The town of Windham is made up of four parts: North Windham, Windham Center, South Windham, and Willimantic. As with many towns with abundant river water-power, mills are a very large part of the history of the town. The mills sprang up around the Willimantic River in the borough of Willimantic, while Windham remained a farming community. North and South Windham had limited industry. The populated area of the town in the colonial period was Windham Center. When the industrial revolution came to the United States, the mills grew and Willimantic became the more populated area. In 1877 The Willimantic Enterprise newspaper started serving the citizens of Windham and surrounding towns. The newspaper grew, and became the Willimantic Chronicle, and later The Chronicle. The newspaper has been published by the same family for five generations. In 1889 the Willimantic State Normal School opened its doors. (A “normal school” was a school of higher education which women went to after High School to become teachers.) The course of study was two years long. Women signed a contract stating they would only teach in Connecticut and received free tuition and books. Room and board was $3.50 a week. The school became Willimantic State College in 1959, and in 1967 Eastern Connecticut State College. Then in 1983 the college received university status and afterwards became part of the state university system as Eastern Connecticut State University.

In 1907 the Sisters of Charity of Our Lady Mother of Mercy established a small hospital across from Saint Joseph’s Church. This was Windham’s first hospital building. The hospital vowed to treat all patients no matter how little money they had, their race, or their background. Many of the patients were mill workers who were victims of machinery accidents. By 1929 the hospital was having a problem with too little space and had to start turning people away. In 1930, during the height of the depression, $500,000.00 was raised, the Vanderman family donated 12 acres (49,000 m2) of land, and Windham Memorial Community Hospital (now known as Windham Hospital) was established.

Sites listed on the National Register of Historic Places 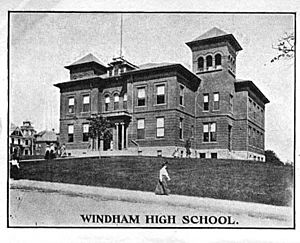 There were 8,342 households out of which 30.1% had children under the age of 18 living with them, 39.4% were married couples living together, 16.8% had a female householder with no husband present, and 39.0% were non-families. 29.8% of all households were made up of individuals and 11.2% had someone living alone who was 65 years of age or older. The average household size was 2.47 and the average family size was 3.05.

All content from Kiddle encyclopedia articles (including the article images and facts) can be freely used under Attribution-ShareAlike license, unless stated otherwise. Cite this article:
Windham, Connecticut Facts for Kids. Kiddle Encyclopedia.