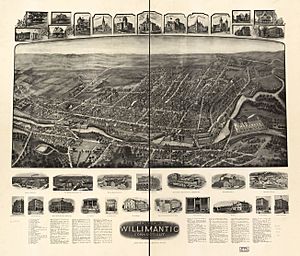 Willimantic is a census-designated place, former city and borough, and special-services district. It's located in the town of Windham in Windham County, Connecticut, United States. The population was at 17,737 at the 2010 census. It is home to Eastern Connecticut State University, as well as the Windham Textile and History Museum. Willimantic was incorporated as a city in 1893; the city was superseded in 1983 by the Willimantic Special Services District/Willimantic CDP. It is also the birthplace of former U.S Senator Christopher Dodd of Connecticut.

Willimantic is an Algonquian term for "land of the swift running water".

From the end of the Civil War to the outbreak of World War II, Willimantic was a center for the production of silk and cotton thread. Immigrants from Europe arrived to work in the mills—Irish, Italians, Poles, Germans and French Canadians. Later, Estonian, Ukrainian, Latvian, Lithuanian, and Puerto Rican immigrants moved to the town in search of mill jobs.

Railroads added to the growth of Willimantic; the town was one of only a handful of stops between Boston and New York on the high-speed "White Train" of the 1890s. In the early 20th century, between 50 and 100 trains ran through Willimantic daily. More than 800 ornate Victorian homes multiplied in the town's Prospect Hill section, which is now listed on the National Register of Historic Places. The town prospered, growing from a population of less than 5,000 in 1860 to more than 12,100 by 1910.

But hard times followed; American Thread moved to North Carolina in 1985 and without it, the town's economy floundered. In 1983, the city and the town consolidated and became one town again. The unemployment rate in Windham, the town that contains Willimantic was 7.8% as of December, 2014.

Today, several projects aiming to revitalize the town are under way. The Willimantic Whitewater Partnership plans to reclaim the town's riverfront by developing a whitewater park and research facility. Some of the town's distressed factory buildings have been turned into residential space for artists by Artspace. Efforts to attract high-tech businesses to the area have turned other former factory buildings into space for small technology startups. In August 2008, Bizjournals.com ranked Willimantic the 43rd most desirable town in the country based on quality of life, location and other factors. 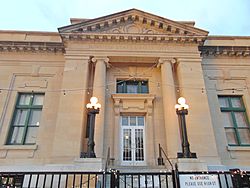 The old post office in 2017, it currently hosts a brewery.

There were 5,604 households out of which 29.7% had children under the age of 18 living with them, 33.5% were married couples living together, 18.1% had a female householder with no husband present, and 43.5% were non-families. 33.2% of all households were made up of individuals and 12.7% had someone living alone who was 65 years of age or older. The average household size was 2.45 and the average family size was 3.13.

The urban area is a small area surrounding the CDP, which's current population is 29,669 at the 2010 census.

In 2007, writer-director A.D. Calvo filmed portions of his debut film, The Other Side of the Tracks, in Willimantic. More recently, during the summer of 2011, Calvo returned to film the majority of his third feature, House of Dust, on the campus of Eastern Connecticut State University and various other locations in town.

All content from Kiddle encyclopedia articles (including the article images and facts) can be freely used under Attribution-ShareAlike license, unless stated otherwise. Cite this article:
Willimantic, Connecticut Facts for Kids. Kiddle Encyclopedia.