The museum is home to a replica Columbia Roundhouse built in 2000. It holds many exhibits, including the former train station for Chaplin, twelve diesel-electric trains, and four steam locomotives. The Air Line Trail runs along the edge of the property, as did the Connecticut Eastern railroad for which the museum is named. The roundhouse contains a 60-foot Armstrong turntable.

The original Columbia Junction roundhouse was constructed in 1892 and was torn down in the 1930s. The site was cleared of trees and debris in 1991, and the museum was established in 1995. The museum was able to reconstruct the roundhouse as part of a $400,000 grant package secured by Senator Donald Williams in 1998, as well as to complete site improvements and bring utilities to the property. The exterior walls were reconstructed in 2000, using the original foundation as a base. A special ceremony was held on June 10, 2001 to lay the cornerstone. Exterior doors were hung the following year.

The roundhouse is now home to some of the museum's historic collection of trains. A replacement 60-foot, manually operated turntable was purchased from Edaville Railroad in 1994, moved to the site, and installed by museum volunteers.

This former New Haven freight house was once located in Groton, Connecticut along the main line opposite Groton tower, on property belonging to Amtrak and no longer needed. Amtrak donated the structure to the museum in 1998; it was moved there in 1999 and restored by volunteers.

This building was first used as a train station in 1872 by the Boston, Hartford and Erie Railroad to serve Clarks Corner, just across the town line from Chaplin, Connecticut. It was originally built as a commercial building, possibly a tin shop, and later converted for use as a train station for the small community. The BH&E became a part of the New Haven by 1898. The station was replaced by a larger structure in 1901, and the station master purchased the old building and had it moved to his backyard. The family later donated the station to the museum and it was relocated in 1995.

This small shanty housed a telegraph operator who would relay orders between the dispatcher and train crews. This shanty was located in Versailles, Connecticut, and was used by the New Haven Railroad. When the telegraph station was closed, it was purchased by an employee who had it moved to his property. It was donated and moved to the museum in 2000, where it is currently used as a ticket booth and information center. 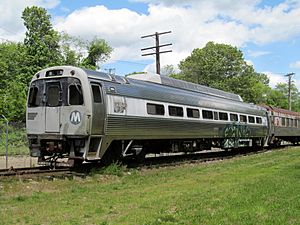 The museum is home to several pieces of railroad equipment with ties to the region's history.

All content from Kiddle encyclopedia articles (including the article images and facts) can be freely used under Attribution-ShareAlike license, unless stated otherwise. Cite this article:
Connecticut Eastern Railroad Museum Facts for Kids. Kiddle Encyclopedia.