Newington is a town in Hartford County, Connecticut, United States. Located 8 miles (13 km) south of downtown Hartford, Newington is an older, mainly residential suburb located in Greater Hartford. As of the 2010 census, it had a population of 30,562. The Connecticut Department of Transportation has its headquarters in Newington.

Newington is home to Mill Pond Falls, near the center of town. It is celebrated each fall during the Waterfall Festival.

The American Radio Relay League is headquartered in Newington, with a call sign of W1AW.

Newington has a history of nearly 375 years. While not established officially as a separate town until 1871, settlers from nearby Wethersfield took up residence on the western frontier of their riverside town in 1636. “West Society,” as some called it, was an area rich in timber that was used for pipe staves, barrel-sized containers used for colonial trade. Grand pastures also made the land ideal for herding and grazing cattle. Its inhabitants received land grants from Wethersfield leaders. Known as “West Farms,” the area west of the central portion of Wethersfield became settled by those who were almost exclusively the descendants of the earliest Wethersfield settlers. In 1721, the “western” farmers requested that the General Assembly of the Connecticut Colony give their land the name “Newington” to denote “the new town in the meadow.” The Assembly granted the request, even though it took another 150 years before Newington officially became an incorporated town. The town’s name predates its official existence.

Newington’s motto inscribed on its town seal is “growth and progress,” which it began putting into effect at the end of the eighteenth century. In 1798, the precursor to the Berlin Turnpike was authorized and it changed the complexion of the land by dividing the vast farmlands from the commercial center. Originally called the Hartford and New Haven Turnpike, the route attracted a number of businesses from north to south between Hartford and New Haven.

The town came into its own at the start of the nineteenth century. Its location in the center of Connecticut attracted an increasing number of residents and commercial enterprises. Veteran of the War of 1812 Levi Lusk established one of the first businesses on the Turnpike, a tavern that stood as a precursor to the many motels, bars, stores, and restaurants that would come later. Railroads passed through Newington as early as the 1830s, which accelerated residential and commercial expansion. More homes were built and businesses established as the nineteenth century unfolded.

Newington grew in population and area by the second half of the nineteenth century. Wethersfield had done likewise, and two population centers were produced as a result. One centered on Wethersfield’s inner village still closely tied to the Connecticut River; the other in Newington had developed its own identity distinct from its mother town.

An 1870 map of Newington shows that the town was divided into four districts—the North, the Middle, the South, and the South-east—that ran from east to west. From north to south, four main roads traversed the four districts starting from what is today the West Hartford line extending all the way to the Berlin line to the east. Later the roads would be called the Berlin Turnpike, Main Street, Willard Avenue, and Church Street. The town extended four miles in a north-south direction and three miles in an east-west direction.

Incorporation and the Modern Era 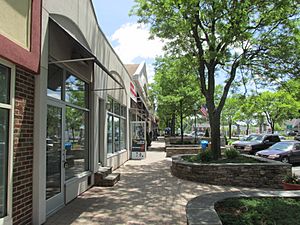 In 1871, Newington had a population of 871 people with 132 dwellings, and roughly 130 farms, a substantial increase from the start of the nineteenth century. When Wethersfield town leaders refused to fund highway improvements for better access to the railroads, the town formally declared its independence on July 10.

Newington’s incorporation coincided with the emergence of the modern era. John Fish’s Store, in the center of town off Willard Street (later Willard Avenue), got the town’s first telephone in 1883. The trolley began service in Newington in 1894 and connected Hartford and New Britain. The ride from Newington to the city took 20 minutes and cost five cents. Not only did residents marvel at the invention, but took note of its revolutionizing force; it was now possible to live in Newington and to work in surrounding cities. Farms still comprised the bulk of Newington land, but the road to the world of suburbia was being paved.

The trolley spurred more population growth. Newington had only 1,000 people living in it at the start of the twentieth century, but the number reached 4,000 by 1930. At first, Anglos moved to the town from Hartford and New Britain as foreign-born Poles, Italians, and Irish settled in those cities.

Automobiles, the most visible sign of technological progress, encouraged more immigration and did away with many farms. In the 1930s, Newington’s political leaders facilitated this change by paving dirt roads, despite the Great Depression which ground much business activity to a halt. Cars as well as the bus system replaced the trolley service in 1937.

Modernization, to Newington, meant more than just trolleys, automobiles, and buses. Using government as an instrument of social improvement, in the spirit of the Progressives, reflected advancement in the early decades of the twentieth century. In 1898 Newington’s Virginia Thrall Smith had appealed to the town's political leaders to build an asylum in Newington for the purpose of caring for neglected children. Overwhelmingly the town approved the request after Smith purchased land at the foot of Cedar Mountain in the town’s eastern portion. Initially, it had been called the Home for Incurables, but in 1968 would be renamed The Newington Children’s Hospital. Three other hospitals were built in town in the early twentieth century contemporaneous with the rise of Progressivism, including the 1911 establishment of Connecticut’s first tuberculosis sanitarium on Cedar Mountain.

By the 1940s, Newington experienced the same level of expansion and population growth that other towns around the state had. The Hartford/New Haven Turnpike was renamed the Berlin Turnpike in 1942, and the road was widened from 18 feet (5.5 m) to 200 feet (61 m) the same year, a clear indication that this part of Newington had become vital to the town's commercial life. Mill Pond, in the western part of town, remained a big attraction for residents because of its natural beauty; its 16-foot natural waterfall remains the smallest in the United States and is depicted on the town seal. But the lifeblood of the community by mid century had shifted away from the area and toward the Turnpike, now known as "gasoline alley" because of the vast number of gas stations there.

Newington's population grew from 5,449 in 1940 to 9,110 in 1950. Along with North Haven, this increase constituted the fastest in the state. By the last decades of the twentieth century, the town's manufacturing base had begun to face dramatic challenges. Newington became the victim of the dwindling defense industry, while at the same time its own businesses such as the Torrington Company, a manufacturer of automobile parts, solvents, and surgical staplers and Loctite, a specialty adhesives maker, left town in the mid-1990s. The building of Interstate 91 and Interstate 84 earlier in the century had affected Newington businesses adversely by making other cities and towns more attractive to industry and but for the success of shopping centers, condominium development, and the continued commercial activity of the Berlin Turnpike, Newington might have seen a sharper economic decline as the twentieth century came to an end.

Newington's population had increased to 29,701 in 2009 and was projected to surpass 30,000 by 2013. The town remained mostly residential with the exception of the Berlin Turnpike, which witnessed a renewed proliferation of commercial enterprises. Reflecting the conspicuous nature of technological advancement, the Turnpike, by the start of the new century, saw the replacement of small businesses with new and larger chain stores.

According to the United States Census Bureau, the town has a total area of 13.1 square miles (34.0 km2). None of the area is covered with water, except for two small ponds, found in the town's largest parks, and various small streams. The town of Newington is bordered by the capital city of Hartford to the north, as well as the suburbs of (clockwise from Hartford) Wethersfield, Rocky Hill, Berlin, New Britain, Farmington, and West Hartford. The town consists mostly of residential areas, although it is also home to the Berlin Turnpike, a large, commercial highway.

The town seal depicts Mill Pond Falls, named for a sawmill that was built there in 1860. The 16-foot (4.9 m) high falls, located in central Newington at Mill Pond Park, is the smallest natural waterfall in the country. A walking path that encircles Mill Pond includes a footbridge which crosses over the waterfall. There is also an observation area with benches at the base of the falls. The park is popular with local residents as a place to walk dogs, ice skate, jog, and picnic; it also hosts the occasional wedding party and festivals. It is open year-round.

Starting in 2000, the Newington Waterfall Committee has celebrated the famed waterfall through the Waterfall Festival, held every September in the center of town. The festival features over 72 vendors and local music groups, as well as the "Artist's Chalk Walk" in which artists of all ages compete to create the best chalk drawing while passersby attend the festival. On April 17, 2010, the Newington Waterfall Committee agreed to plant a Crimson Maple dubbed the "Thankful Tree" at the falls, giving Newington residents the chance to write on tags what they are thankful for. 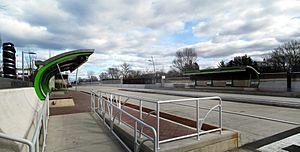 Although Amtrak does not currently serve Newington directly, the town center is located approximately 8 miles (13 km) south of Hartford's Union Station. Additionally, Newington is a planned stop along the Hartford Line, a proposed commuter rail service from New Haven to Springfield that will use existing tracks, with a possible shuttle bus connection in Windsor Locks for Bradley International Airport. As of December 2015, funding has been secured to finance the construction of the new line, with service scheduled to begin in early 2018. The State of Connecticut has secured funding for restoration of the Newington Junction Railroad Depot, a passenger rail station located off Willard Avenue (CT-173) in the Newington Junction neighborhood. Although the first train station was built on the site in 1850, rail service was discontinued in 1959.

In March 2015, CTfastrak, Connecticut's first bus rapid transit corridor opened, providing a separated right-of-way between Hartford and New Britain with a stop at Newington Junction. The station consists of two side platforms serving the busway, with two center passing lanes to allow express buses to pass buses stopped at the station. It opened with the line on March 28, 2015.

Newington is served by a few bus routes operated by Connecticut Transit, including the 69, 41, 47 and 45. Additionally, the 907 Newington Express provides express service to downtown Hartford.

The town is served by the Lucy Robbins Welles Library on Cedar Street. The library opened in 1939 with money and land provided by prominent local sisters Fanny A. Welles and Mary Welles Eddy. The library is named for their mother. In 1988, the library received a major renovation that updated and expanded the building while preserving much of the original edifice. Today, the library holds over 167,000 items. The library exceeds the national average in books per capita (5.6 books vs. 2.8 national), visits per capita (7.2 visits vs. 4.9 national), and books borrowed per person (12.5 books vs. 7.4 national). 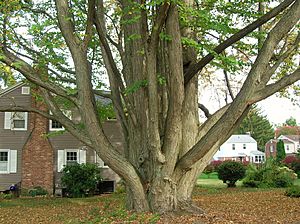 All content from Kiddle encyclopedia articles (including the article images and facts) can be freely used under Attribution-ShareAlike license, unless stated otherwise. Cite this article:
Newington, Connecticut Facts for Kids. Kiddle Encyclopedia.