Bethel is a town in Fairfield County, Connecticut, United States, about 69 miles (111 km) from New York City. Its population was 18,584 at the 2010 census. The town center is defined by the U.S. Census Bureau as a census-designated place (CDP). The core area of the town center is the Greenwood Avenue Historic District.

Interstate 84 passes through the Bethel, and it has a train station on the Danbury Branch of Metro-North's New Haven Line.

Bethel was first settled around 1700. The first houses built in Bethel were in the 1730s or 1740s; they are located at 27 Grassy Plain Street and 63 Grassy Plain Street. 1759 – church members such as Ebenezer Hickok, Lemuel Beebe, Isaac Hoyt, Thomas Starr, and Phineas Judd found it both difficult to travel to church in Danbury and when there, to get a seat. They petitioned the General Assembly to form two distinct ecclesiastical societies, the First and Second Congregational Societies, creating a new second parish in the eastern portion of Danbury. The new area was called Bethel (which means house of God). 1760 – 71 people were members of the church. Bethel ran most of its affairs through the church.(Bethel's first Congregational minister was Noah Wetmore) 1760 – Captain Benjamin Hickock built the house at 245 Greenwood Avenue and used it as a tavern. 1777 (April) – the city's records were burned by the British in the British raid on Danbury. Late 1700s – P. T. Barnum’s grandfather built one of the town's earliest hotels, the Barnum Tavern. 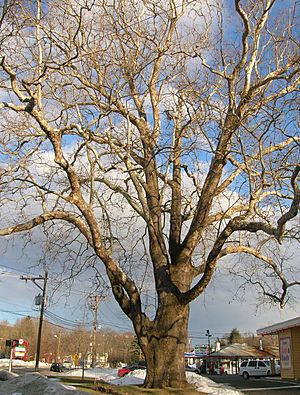 There were 6,505 households, out of which 38.6% had children under the age of 18 living with them, 62.4% were married couples living together, 9.0% had a female householder with no husband present, and 25.5% were non-families. 20.6% of all households were made up of individuals, and 7.7% had someone living alone who was 65 years of age or older. The average household size was 2.76 and the average family size was 3.23.

All content from Kiddle encyclopedia articles (including the article images and facts) can be freely used under Attribution-ShareAlike license, unless stated otherwise. Cite this article:
Bethel, Connecticut Facts for Kids. Kiddle Encyclopedia.