The First Congregational Church of Cheshire is a historic church at 111 Church Drive in Cheshire, Connecticut. Built in 1827, it was designed by David Hoadley and is a prominent local example of Federal period architecture. It was added to the National Register of Historic Places in 1973. The congregation is affiliated with the United Church of Christ. 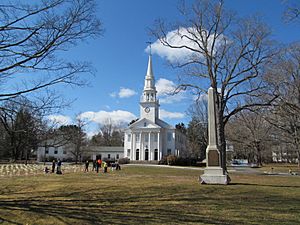 The First Congregational Church is located in Cheshire's town center, on the west side of Connecticut Route 10 opposite the town hall. It is separated by CT 10 by a surviving element of the town green, now owned and managed by the church, and is accessed via Church Drive. It is a two-story wood frame structure, with a gabled roof and clapboarded exterior. Its front facade has a projecting four-column temple front, with round fluted columns rising to Ionic capitals and a fully pedimented gable. Straddling the projecting and the main roof is a tower, with a square base section housing a clock, two octagonal stages (one of which houses an open belfry), and a conical steeple ending in a cross.

All content from Kiddle encyclopedia articles (including the article images and facts) can be freely used under Attribution-ShareAlike license, unless stated otherwise. Cite this article:
First Congregational Church of Cheshire Facts for Kids. Kiddle Encyclopedia.