Brian Joseph Leetch (born March 3, 1968) is an American former professional ice hockey defenseman who played 18 National Hockey League (NHL) seasons with the New York Rangers, Toronto Maple Leafs, and Boston Bruins. He has been called one of the top defensemen in NHL history.

Leetch was inducted into the Hockey Hall of Fame in Toronto in 2009, his first year of eligibility. In 2017 Leetch was named one of the '100 Greatest NHL Players' in history.

Leetch accumulated many individual honors during his 18-year career. He was a two-time Norris Trophy winner as the NHL's best defenseman (1992, 1997) and was the first American-born winner of the Conn Smythe Trophy as playoff MVP for his performance during the Rangers' run to the 1994 Stanley Cup championship. Leetch is one of only five NHL defensemen to score 100 points in a season with his 102-point campaign in 1991–92. He won the Calder Trophy as the NHL Rookie of the Year in 1989 and his 23 goals that season remain an NHL record for rookie defensemen. Leetch's number 2 was retired by the Rangers on January 24, 2008. During the ceremony, longtime teammate Mark Messier referred to Leetch as the single "Greatest Ranger of All Time."

Leetch was born in Corpus Christi, Texas, but was raised in Cheshire, Connecticut, where his family moved when he was three months old. He first learned to play hockey at a local ice rink managed by his father, Jack. In high school, he starred in baseball and hockey, first at Cheshire High School, and then at Avon Old Farms. As a sophomore, Leetch's 90 mph fastball helped the Cheshire Rams baseball team to a state championship and, as a senior at Avon Old Farms, he set the school record for strikeouts in a game with 19. Hockey, however, was the sport in which he most excelled. As a sophomore at Cheshire, he scored 53 goals and 50 assists, earning All-state honors.

In two seasons with Avon Old Farms, Leetch scored 70 goals and 90 assists in 54 games. These numbers were especially remarkable for a defenseman. NHL scouts were starting to take notice and the New York Rangers chose Leetch as their first-round pick (9th overall) in 1986, making him the first player drafted that year who did not play major junior hockey. Following in the footsteps of his father Jack, Brian enrolled at Boston College in the fall of 1986, and, like his father, would become an All-America defenseman for the Eagles.

After one season at Boston College, he played for the US Olympic team at the 1988 Games in Calgary, making his NHL debut, eight days later, with the New York Rangers on February 29, 1988, versus St. Louis. Leetch tallied his first NHL point in the game with an assist on Kelly Kisio's goal. He finished out the 1987-88 season with 14 points in 17 games. In his first full NHL season (1988-89), Leetch notched 71 points, including a rookie defenseman-record 23 goals, winning the Calder Memorial Trophy as well as being selected to the NHL All-Rookie Team.

As the Rangers slowly developed into a championship-caliber team, Leetch won increasing respect from fans for his quiet demeanor and entertaining, offensive-minded play. In 1992 he became the fifth defenseman in history, and the only American defenseman, to record 100 points in a season and was awarded the Norris Trophy. Leetch was the last NHL defenseman to record 100 points in a season. On March 21, 1993, Leetch suffered a broken ankle after slipping on black ice after stepping out of a cab. The injury caused Leetch to miss the rest of the season, prompting a Rangers slump that caused them to miss the playoffs. In 1994 he again matched his career-high of 23 goals in the regular season as the Rangers won the Presidents' Trophy. That year, the Rangers' 54-year championship drought ended with a seven-game Stanley Cup Finals victory over the Vancouver Canucks. Leetch became the first non-Canadian to be awarded the Conn Smythe Trophy, and remained the only American to do so until Tim Thomas of the Boston Bruins in 2011. Leetch was the second player in NHL history (after Bobby Orr) to win the Calder Trophy, the Norris Trophy, and the Conn Smythe Trophy in his career. Only Cale Makar has matched this feat since.

Leetch was the captain of the 1996 championship team representing the United States of America in the World Cup of Hockey.

Following the Rangers' Cup win in 1994, Leetch remained a fan favorite and team leader, serving as Captain from 1997–2000 after the departure of Mark Messier to the Vancouver Canucks (he would return the captaincy to Messier upon Messier's return to the Rangers in 2000). 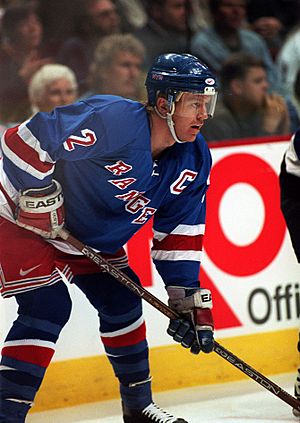 Leetch playing for the New York Rangers in 1997

In 1997, he again won the Norris Trophy and the Rangers made a surprise run to the Eastern Conference Finals, where they were defeated by the Philadelphia Flyers. The next years, however, were marked by disappointing team performances that saw the Rangers miss the playoffs every year.

In 1998, Leetch was ranked 71st on The Hockey News' list of the 100 Greatest Hockey Players. On June 30, 2003, as a pending free agent, his rights were traded to the Edmonton Oilers in exchange for Jussi Markkanen and a fourth-round pick in the 2004 draft. The Oilers did not sign him, and he signed a two-year contract to return to the Rangers a month later. After the especially unsuccessful 2004 campaign, the Rangers traded most of their high-priced veterans; Leetch was traded to the Toronto Maple Leafs just prior to the trade deadline for prospects Maxim Kondratiev, Jarkko Immonen, a first-round pick in the 2004 draft, which became Kris Chucko (pick was later traded to the Calgary Flames), and a second-round pick in 2005, which became Michael Sauer.

Leetch was set to play the 2004–05 season with the Maple Leafs, however, due to the 2004–05 lockout, the last year of his contract expired, and he became a free agent. Leetch signed a one-year, $4-million contract with the Boston Bruins before the 2005–06 season. Although the Bruins failed to make the postseason, Leetch scored his 1,000th career point as a member of the team.

Throughout the 2006–07 season, Leetch received contract offers from several NHL teams, but accepted none. On May 24, 2007, Leetch officially announced his retirement, bringing his 18-year NHL career to an end.

On September 18, 2007 Leetch was announced as one of the four recipients of the 2007 Lester Patrick Trophy.

On January 24, 2008, the New York Rangers retired Leetch's number 2 jersey, joining fellow 1994 Stanley Cup Champion teammates Mark Messier and Mike Richter, as well as Rod Gilbert and Eddie Giacomin in the rafters of Madison Square Garden. On that night, his friend, Derek Jeter of the New York Yankees congratulated Leetch for the honor of having his number retired with a video that ended with Jeter saying "So congratulations, from one number 2 to another." Leetch also had the honor of announcing during his ceremony that the New York Rangers would retire his friend and former teammate Adam Graves' number during the 2008–09 season, joining Leetch and the other greats above the Madison Square Gardens ice.

On October 10, 2008, both Leetch and Richter were among four were inducted into the United States Hockey Hall of Fame in Denver. Both of them also played for the silver medal-winning U.S. ice hockey team during the 2002 Winter Olympics.

On June 23, 2009, it was announced that Leetch would be inducted into the Hockey Hall of Fame. He was honored during the November 6–9 induction weekend alongside Steve Yzerman, Brett Hull and Luc Robitaille. The induction made it the third year in a row that a member of the Rangers' 1994 Stanley Cup team has been inducted into the Hockey Hall of Fame, following Messier in 2007 and Glenn Anderson in 2008, who was also inducted along with one of the on-ice officials when the Rangers won the Stanley Cup, Ray Scapinello.

In August 2015 Leetch became manager of player safety in the NHL's Department of Player Safety, leaving after one season.

All content from Kiddle encyclopedia articles (including the article images and facts) can be freely used under Attribution-ShareAlike license, unless stated otherwise. Cite this article:
Brian Leetch Facts for Kids. Kiddle Encyclopedia.