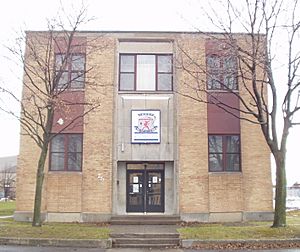 The International Hockey Hall of Fame in Kingston hosted IIHF exhibits from 1992 to 1997.

The International Ice Hockey Federation (IIHF) was founded in 1908, with a membership that consisted of five European nations. The federation has since grown to include 76 national association members as of 2019, and now oversees international events which include ice hockey at the Olympic Games, and the Ice Hockey World Championships.

The IIHF had amassed a collection of artifacts from these events over the years, but only displayed them in temporary exhibits. In 1991, the IIHF reached an agreement with the city of Kingston, Ontario, and the International Hockey Hall of Fame, to loan its exhibits to the museum for a five-year period from 1992 to 1997, while a more permanent display was being planned. Kingston City Council provided a C$100,000 line of credit towards building a true international ice hockey museum. The temporary setup for the IIHF exhibits was located adjacent to the Kingston Memorial Centre, but that partnership ended in 1997, when the IIHF withdrew. The IIHF cited the lack of progress made towards getting a new facility constructed in downtown Kingston, as the primary reason for terminating the agreement. 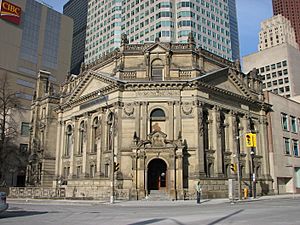 The first step taken by the IIHF to create its own hall of fame was a proposal made in 1996, which was later ratified at the 1997 IIHF summer congress to host the museum in Zürich. The approval came exactly 89 years from the foundation of the IIHF, with the purpose of honoring former international ice hockey players, builders (administrators) and officials. The IIHF has sought to honor the people who have made the greatest contributions to developing hockey in their respective nations, and internationally, with the annual induction ceremony taking place on the medal presentation day of the Ice Hockey World Championships.

The hall of fame recognized its first members at a ceremony in Helsinki, during the 1997 Men's World Ice Hockey Championships. The longest-serving president of the IIHF at the time, Paul Loicq, and 30 others were members of the inaugural class of inductees. The IIHF later agreed with the National Hockey League to transfer its exhibits to the Hockey Hall of Fame in Toronto, as of 29 July 1998.

The IIHF has also created two other awards to honor international hockey persons. The Paul Loicq Award has been awarded annually since 1998 for contributions to the development of hockey. In 2015, the IIHF created the Torriani Award for "players with an outstanding career from non-top hockey nations". The award was named for Bibi Torriani, who played internationally for the Switzerland men's national ice hockey team. The two awards are handed out at the same time as the hall of fame induction, but their recipients are not included in the total number of IIHF Hall of Fame inductees. 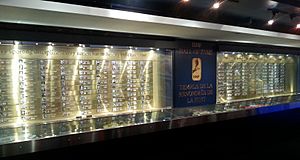 The IIHF Hall of Fame and its exhibits reside in the "World of Hockey Zone", and are sponsored by Tissot. At approximately 6,000 square feet (560 m2), it is the largest section of the Hockey Hall of Fame. The zone includes the IIHF Hockey Hall of Fame honor roll, listing each inductee by country and year of enshrinement. Each national association member of the IIHF is represented in the collection of artifacts in the display, which includes many national team hockey jerseys. The World of Hockey also recognizes members of the Triple Gold Club, and displays memorabilia from the "Miracle on Ice" at the 1980 Winter Olympic Games. Other notable events included are the 1972 Summit Series, the men's and women's Ice Hockey World Championships, national-level hockey leagues in Europe, the Spengler Cup, the World Cup of Hockey, and the Canada Cup. 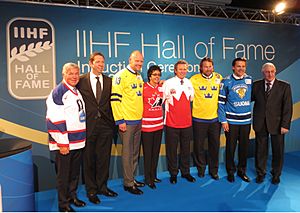 Elections to the IIHF Hall of Fame are based on the proposed candidates from national associations, members of the IIHF council, and members of the elections committee. There will be 224 total inductees as of 2019, which includes 155 in the player category, 63 in the builder category, and 6 in the referee category.

In 2008, Geraldine Heaney, Angela James, and Cammi Granato became the first three women inducted into the IIHF Hall of Fame.

As of 2020, Bob Nadin is the only recipient of the Paul Loicq Award to also be inducted into the IIHF Hall of Fame.

All content from Kiddle encyclopedia articles (including the article images and facts) can be freely used under Attribution-ShareAlike license, unless stated otherwise. Cite this article:
IIHF Hall of Fame Facts for Kids. Kiddle Encyclopedia.