The International Ice Hockey Federation (IIHF) (French: Ligue Internationale de Hockey sur Glace) is the worldwide governing body for ice hockey and in-line hockey. It is based in Zurich, Switzerland, and has 70 members. It is responsible for the management of international ice hockey tournaments, and maintains the IIHF World Ranking.

Despite its worldwide authority, the IIHF has little control of hockey in North America, where the National Hockey League (NHL) is the highest hockey organization. Its base of power rests in Europe with the respective national governing bodies and leagues. Canada (Hockey Canada) and the United States (USA Hockey) are the only members who have their own rulebooks.

Decisions of the IIHF can be appealed to the Court of Arbitration for Sport in Lausanne, Switzerland.

As part of the centennial celebrations of the IIHF's founding, the 2008 IIHF World Championship was held in Canada, the perennial leaders of the sport. This was the first time the championships were hosted in Canada. Russia went on to win the 2008 Championship.

The main functions of the IIHF are to govern, develop and organize hockey throughout the world. Also to promote friendly relations among the member national associations and to operate in an organized manner for the good order of the sport. The federation may take the necessary measures in order to conduct itself and its affairs in accordance with its statutes, bylaws and regulations as well as in holding a clear jurisdiction in what concerns to ice hockey and in-line hockey at the international level. The IIHF is the body responsible with arranging the sponsorships, license rights, advertising and merchandising in connection with all IIHF competitions.

Another purpose of the federation is to provide aid in the young players' development and in the development of coaches and game officials. On the other hand, all the events of IIHF are organized by the federation along with establishing and maintaining contact with any other sport federations or sport groups. The IIHF is responsible for processing the international players' transfers. It is also the body that presides over ice hockey in the Olympic Games as well as over all levels of the IIHF World Championships. The federation works in collaboration with local committees when organizing its 25 World Championships, at five different categories.

Even though the IIHF runs the world championships, it is also responsible for the organization of several European club competitions such as the Champions Hockey League or the Continental Cup. With its 100 anniversary, the federation launched a new annual club competition in 2008, the Victoria Cup, named after the Montreal Victoria Skating Rink, the site of the first organized indoor ice hockey match. The federation is governed by the legislative body of the IIHF which is the General Congress along with the executive body, which is the Council. The Congress is entitled to make decisions with regard of the game's rules, the statutes and bylaws in the name of the federation. It is also the body that elects the president and the council or otherwise known as board. The president of the IIHF is basically the representative of the federation. He represents the federation's interests I all external matters and he is also responsible that the decisions are made according to the federation's statues and regulations. The president is assisted by the General Secretary who is also the highest ranked employee of the IIHF.

The International Ice Hockey Federation was founded on May 15, 1908 at 34 Rue de Provence in Paris, France, as Ligue International de Hockey sur Glace (LIHG). The founders of the federation were representatives from Belgium, France, Great Britain, Switzerland and Bohemia (now Czech republic). Louis Magnus, the French representative, was the fifth member to sign the founding document and also the first president of the LIGH. A year later, the first congress was held in Paris and then another one during the same year in Chamonix, France.

Associate members either do not have a national body dedicated to the sport, or do not regularly participate in the international championships. They are Andorra, Armenia, Brazil, Georgia, Greece, Kuwait, Kyrgyzstan, Liechtenstein, Macau, Macedonia, Malaysia, Moldova, Morocco, Portugal, Singapore and United Arab Emirates.

Affiliate members participate only in the inline championships. They are Argentina, Chile and Namibia. 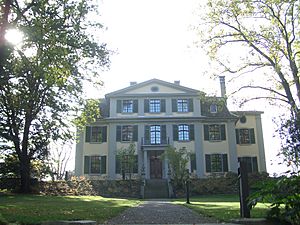 All content from Kiddle encyclopedia articles (including the article images and facts) can be freely used under Attribution-ShareAlike license, unless stated otherwise. Cite this article:
International Ice Hockey Federation Facts for Kids. Kiddle Encyclopedia.