The Slovak men's national ice hockey team is one of the best national ice hockey teams in the world. As of 2008, the International Ice Hockey Federation (IIHF), the world governing body of ice hockey, ranks them as the eighth best national team. The team is operated by the Slovak Ice Hockey Federation under general manager Peter Bondra, and head coach Ján Filc. In the last six years, Slovakia has won three medals at the World Championships, including a gold medal in 2002. Slovakia has a total of 12,375 hockey players (0.23% of the population).

The Slovak national team was created after Czechoslovakia was split into the Czech Republic and Slovakia. For years, the Czechs kept control over how the Czechoslovakian national team was run, and limited how many Slovak players were on the team. When the country became two, the Czech Republic team was allowed to compete at the highest pool (A), and the IIHF ruled that because fewer players of the former Czechoslovak team were Slovaks, Slovakia have to start international play in pool C, the lowest group. However, Slovakia's play in the lower pools won it promotion to pool A by 1996. 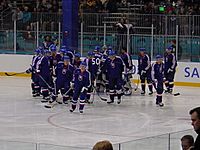 Slovakia's team at the 2002 Winter Olympics.

All content from Kiddle encyclopedia articles (including the article images and facts) can be freely used under Attribution-ShareAlike license, unless stated otherwise. Cite this article:
Slovakia men's national ice hockey team Facts for Kids. Kiddle Encyclopedia.